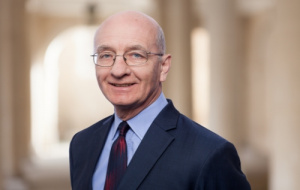 Robin Allen QC (1969, PPE) gave the final Hamlyn Lecture at Middle Temple Hall on 5 November, on “The Most Contentious Problem: Comparing Rights in Conflict”. Mr Allen is a leading equality lawyer who has instructed in over 40 Supreme Court/House of Lords test cases and has twice been named “Employment Law Silk of the year”.

Mr Allen chose the subject: “Why does Equality seem so difficult? Three Problems in Comparison” for his three lectures. You can listen to a recording of the first lecture, “The newest problem: Making a fair comparison across all ages”, held at Queen’s University Belfast. The second lecture in Edinburgh was on the issue of equal work.

Robin Allen is Joint Head of Cloisters Chambers, Bencher of Middle Temple and Chair of the Equality and Diversity Committee of the Bar Council of England and Wales. He acted for the Equality Commission for Northern Ireland in the Northern Ireland Court of Appeal in the “Gay Cake” case. The judges ruled unanimously that a baker’s refusal to make a cake for gay rights activist Gareth Lee with “Support Gay Marriage” written on it was discriminatory.

Univ in the Arts

Univ in the Arts burst into…