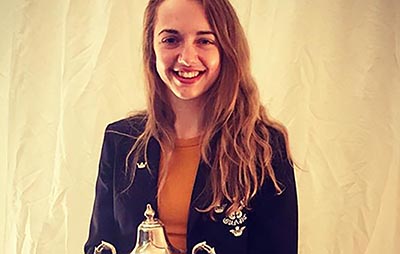 Rachel Wheatley (2016, Plant Sciences) has been named Sportswoman of the Year at the University Sports Awards in recognition of her achievements in judo and boxing.

She has been awarded British Universities & Colleges Sport (BUCS) judo championship medals for Oxford every year she has competed, and won more than 30 fights last year.

Not content with dominating in one sport, Rachel also won silver at the 2017 BUCS boxing championships.

Rachel has full blues in judo and boxing, and enjoys contributing to her sports at all levels. She is the current women’s captain of the Oxford University Judo Club (OUJC), was their President in 2015-2016, the Sponsorship Officer in 2016-2017 and the OUJC Social Secretary in 2014-2015. She is also the Oxford University Amateur Boxing Club Welfare Office.

And to top it all, Rachel also makes time to help out at College as a Junior Dean.

When she isn’t fighting or supporting students and teammates, Rachel is researching the mechanism of root attachment and colonisation of rhizobia and legume as part of her DPhil.

Rachel proves it’s possible to be as strong in your sport as you are in your subject.

She is an inspiration and a role model to students everywhere, and we wish her every success for the future.