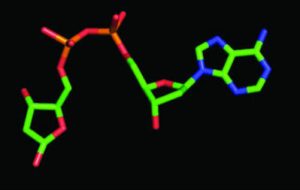 An interdisciplinary and international research team has discovered a new endogenous cellular molecule called 2′-deoxy-ADPR (dADPR) which may play an important role in autoimmune and metabolic disorders such as gout, obesity and diabetes.

The research, just published in the September edition of the top-ranked journal Nature Chemical Biology, is the result of a long term collaboration between medicinal chemists from the University of Oxford’s Department of Pharmacology and the University of Bath in the UK, led by Univ Special Supernumerary Fellow Professor Barry Potter, with biologists and biochemists at the University Medical Centre Hamburg-Eppendorf in Germany.

The team has been working for some years on a potential new drug target, the cellular ion channel Transient Receptor Potential Melastatin 2 (TRPM2).

Previously, it had been assumed that this channel is activated by a different molecule. The new work, however, suggests that dADPR may actually be the true activator and this was identified, surprisingly, as a having over 10 times higher activity.

The TRPM2 channel is found mainly in the immune system and the brain where it has been linked to Alzheimer’s disease. Its activation lets cations, including calcium, move into the cell. It is involved in insulin secretion, immune cell responses and activation of the inflammasome.

Based on this the group also studied the mechanism behind the dADPR response, using, amongst many techniques, mass spectrometry on extracts from stimulated cells to prove that the molecule is indeed found in cells. They also demonstrated that dADPR can be produced by cellular enzymes using substrates available in cells. This leads to the intriguing suggestion that they have discovered the true activator of TRPM2 and potentially a new so-called “second messenger” molecule, one of a small group of compounds that carry chemical signals in cells. Further work is now underway to explore this idea.

These results could aid a better understanding of TRPM2 channel activation and its role in disease and may lead to the development of new drug candidates.

“This new paper represents the pinnacle of many years of intense work and is one of the latest fruits of a UK-German collaboration in Cellular Signalling that has now extended over more than 20 years,” said Professor Potter.

“Such work demonstrates that combining interdisciplinary synthetic chemistry with cell biology can be both extremely powerful and synergistic.”