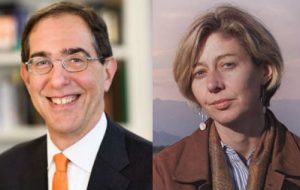 We are delighted to announce that award-winning foreign correspondent and bestselling writer Christina Lamb OBE (1983, PPE), and the President of Princeton University, Professor Christopher Eisgruber, (1983, Politics) have accepted Honorary Fellowships from University College.

Christina Lamb is one of Britain’s leading foreign correspondents and a bestselling author.  She has won 14 major awards including Foreign Correspondent of the Year five times and Europe’s top war reporting prize, the Prix Bayeux. She was made an OBE by the Queen in 2013.

She was educated at Nonsuch High School for Girls and was the first person in her family to go to university. After graduating, she moved to Peshawar in 1987 to cover the mujaheddin fighting the Soviet Union, and within two years had been named Young Journalist of the Year.

Currently Chief Foreign Correspondent for The Sunday Times, her postings have included South Africa, Pakistan, Brazil and Washington and she has recently reported on the child refugee disappearances in Europe, and on the Yazidi women abducted by ISIS in Iraq and kept as sex-slaves.

She has written eight books, is a patron of Afghan Connection and is on the board of the Institute of War and Peace Reporting.

She has given talks all over the world, from NATO conferences to the annual Avon Ladies convention, and her portrait has been in the National Portrait Gallery and the Ashmolean Museum in Oxford.

Christina Lamb is the first female former undergraduate to be elected an Honorary Fellow.

She is awarded the Honorary Fellowship in recognition of her courageous, vivid and critically important journalism, as well as for her support of the College.

Professor Eisgruber has been President of Princeton University since 2013. A renowned constitutional scholar, he served as a member of the Princeton faculty for 12 years and as Princeton’s provost for nine years before being named president.

In addition to writing and editing several books and publishing numerous articles on constitutional issues, Professor Eisgruber has testified multiple times before legislative bodies on the issue of religious freedom. In 2014 he was elected to membership in the American Academy of Arts and Sciences.

During his first four years as Princeton’s president, he has emphasized the importance of socioeconomic diversity and has significantly increased the number of students coming from low-income backgrounds.  His strategic plan for the University reaffirms Princeton’s commitment to liberal arts education and calls for expansion of the University’s undergraduate student body, major investments in engineering and environmental studies, and new initiatives focused on public service and entrepreneurship.

He is awarded the Honorary Fellowship in recognition of his work as a legal and constitutional scholar, and for his inspiring and robust leadership of a globally outstanding university in challenging times.