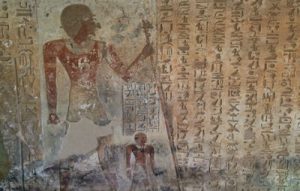 What is the connection between the sites of Elkab, Gebel Silsila, ancient Egyptian dreams and the god Osiris? These are all topics explored in the research of Professor Mark Smith and Dr Luigi Prada.

Luigi’s fieldwork  takes him both to Egypt and Sudan.  As a member of the Oxford Expedition to Elkab, Luigi is studying the reuse of pharaonic monuments as attested in ancient visitors’ graffiti. This work includes the documentation of how tombs and desert temples from the second millennium BC were altered and reused in Graeco-Roman antiquity, more than a millennium after their original construction.  By this time, these monuments were already ancient, and pious visitors left hundreds of graffiti on their walls, commemorating their visits.

Mark’s fieldwork also focuses on graffiti, in this case, at the remote site of Gebel Silsila, roughly 145km south of Luxor, again in southern Egypt.  Here, the impressive sandstone quarries, which provided the building material for several of Egypt’s most imposing temples, preserve quite different types of ancient Egyptian graffiti, which constitute a rich store of information about the lives and day-to-day activities of the stoneworkers at this site. Mark’s publication, detailing this work, is one of his current projects in preparation.

Sites within  Sudan where Luigi has worked as a member of a British team   include the rock-cut temple of the pharaoh Thutmosis III (c. 1450 BC) at Jebel Dosha, situated on a cliff which dominates the Nile and which the ancient Egyptians considered to be a sacred site, as well as the Dal Cataract, a remote area in the desert of northern Sudan, where ancient Egyptian military expeditions carved inscriptions, commemorating their feats.

Apart from fieldwork, Luigi’s other research interests include ancient Egyptian divination, especially dream interpretation, which forms the subject for an upcoming monograph. This publication will present his research relating to how the ancient Egyptians believed that dreams bore messages about the dreamer’s future.  This belief triggered the development of a whole area of study  in order to decode them. The results of this study were recorded in dream interpretation handbooks, written on papyrus scrolls, many of which have survived in the sands of Egypt to the present day. It is debated what bearing the practice of divination had on Egyptian religious beliefs but this is, perhaps, an area where Luigi and Mark enjoy some of their livelier discussions.

Mark’s keen interest in ancient Egyptian religion, and in particular Egyptian ideas about the afterlife, is reflected in the title of his most recent book, Following Osiris: Perspectives on the Osirian Afterlife from Four Millennia, published by Oxford University Press in February 2017. This publication traces the rise and fall of belief in the ancient Egyptian god of the dead. It also explores broader issues, making use of cross-cultural comparisons, for instance, how different societies regard death and the dead, why people convert from one religion to another, and why people abandon belief in a god or gods altogether.

We would like to invite you to read more about the ongoing research of Univ’s Egyptologists, and the history of Egyptology at the College, in the Spring issue of the Martlet.

Did you read Egyptology at Univ? If so we would be delighted to hear from you.

For details of how to order Mark’s most recent publication, Following Osiris, please see global.oup.com