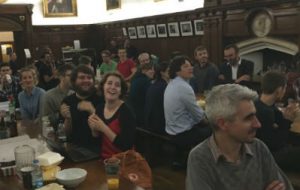 With polling stations closing on Theresa May’s snap general election, Sir Ivor Crewe took to the microphone in a packed Hall to provide a night of insightful political analysis as counting began.

Sir Ivor started the evening with some words of caution: ‘The polls can’t all be right, but we don’t know which ones are.’ This was greeted with applause that turned quickly to cheers on the closer-than-expected exit poll announcement. ‘That could mean May is gone sooner rather than later,’ explained Sir Ivor.

But with a long night in prospect, the assembled students and staff hunkered down with phones and laptops to follow progress and begin speculating on potential outcomes.

Silence fell over Hall periodically as the main returns were announced – capped with cheers or boos – with Sir Ivor commenting on key turning points and the latest predictions. And whilst things continued to look less than settled for the entirety of the night the biggest cheer was reserved for the Master’s observation: ‘The one thing we won’t have for the next five years is a strong and stable government.’

Attendees may have dwindled by 5am, but the spirit certainly hadn’t with a few hardy souls waiting out the final hung parliament outcome.

Our thanks to Sir Ivor for such lively and informative analysis throughout, and to all of the College staff who helped make this memorable night such a success.