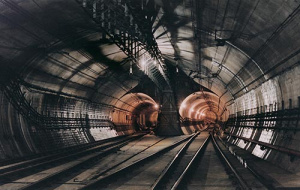 I arrived in the then colony in 1970 as Senior Partner in Hong Kong of Freeman Fox & Partners, the lead consultants to the design consortium. There was a two year delay as the incumbent HK Government Financial Secretary was against spending the money. My work initially was to do what I could to keep the project alive and provide any information to Government.

The Financial Secretary retired in 1972 and was succeeded by Philip (later Sir Philip) Haddon-Cave. He was a strong advocate of the railway and we were instructed to proceed with the detailed design of the system. 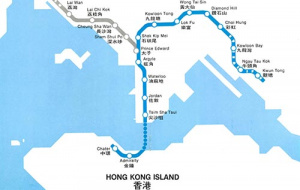 The Governor appointed the “The Mass Transit Railway Steering Committee”. It was chaired by Haddon-Cave. The committee included the Director of Public Works and various other senior civil servants. I was not a member of this committee but attended all its meetings to take instructions and obtain decisions.

Government then decided to invite international consortia to build the Initial System for a lump sum. The Initial system comprised a line from Kwun Tong in Kowloon to the Central District on Hong Kong Island and a branch line from Mong Kok to Lai Chi Kok. In the event only a Japanese consortium led by Mitsubishi came forward with an offer to build the Initial System for five billion HK dollars. We were instructed to forward our designs to Mitsubishi as they were developed to show what was required.

For the next two years I and my team travelled to Japan with Government representatives to carry out “design negotiations”. It soon became apparent that the Japanese had no intention of meeting our requirements. They were proposing shorter and narrower trains, smaller stations and many other proposals that we considered unacceptable and would quickly lead to serious system overloading. For the record we were specifying trains 3.2m wide with eight cars in two car sets 181.5m long with a crush capacity of3,200 passengers. Seats for only 48 passengers and wide vestibules would allow maximum movement along the train. Traction electrical supply to the trains would be 1,500 volts DC.

In 1974 our concern was relieved by a major fuel crisis. Costs of construction rose worldwide and the Japanese Consortium withdrew their offer.

We now set about persuading the Steering Committee to instruct us to prepare a series of contract documents to invite tenders to construct the railway as we had designed it. To save costs it was decided to omit the section of line from Central to Western Market and the branch line to Lai Chi Kok. The resulting “Modified Initial System” comprised a single line from Kwun Tong to Central together with the maintenance depot at Kowloon Bay. Bids were invited internationally for civil engineering contracts, trains and other electrical and mechanical services. Work commenced in July 1975. 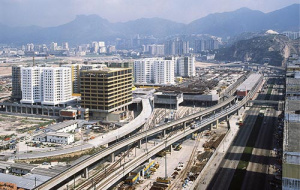 We then hit a problem. Our design was based on the use of a third rail to supply the power to the trains. The Corporation decided that they wanted an overhead catenary system, rather than a third rail for the power supply to the trains. I was unable to change their minds. An overhead catenary system could not be accommodated in the bored tunnels under Nathan Road. The prospect of negotiating larger bored tunnels with the contractors was unthinkable.

Fortunately, the day was saved by Siemens who had developed a “sprung arm” system for supporting the live power line in much less space than would be required for a catenary. Even so we had to dish the roofs of the trains to lower the pantographs to achieve the necessary electrical clearances from the tunnel roof and the roofs of the trains.

Furthermore, we discovered that the location plans for electricity cables, gas and water pipes under Nathan Road had all been destroyed by the Japanese during the wartime occupation. I had to put an engineer full time on taking measurements at every road opening work. Eventually we were able to fill in the gaps in our knowledge.

It is beyond the scope here to discuss all the challenges of designing a new railway that could cope with the high ambient temperatures of the Hong Kong summer or the problems to overcome by construction of the harbour crossing which was achieved by sinking tunnel sections into a trench dredged in the sea floor.

However, the junction at Mong Kok was the subject of intensive study. Once the branch to Lai Chi Kok opened it would not be possible for trains from both branches to run through to Central during the peak two minute headway service. Half of the trains from the branches would have to be reversed at Mong Kok.

Over twenty different arrangements of this junction were examined and marked on points covering benefits to passengers, operating facility and capital and operating costs. The schemes fell into three categories.

1 “Triangular” schemes whereby all trains turn left onto the next branch. These were ultimately discarded as they would lead to widespread property destruction and platform overloading.

2 Alternate reversing and interworking schemes. These too were discarded as a delay on one branch would cause delay on other lines leading to dangerous platform overloading. 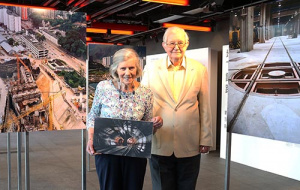 Planning the stations with entrances and ventilation shafts in Kowloon’s busy streets was a challenge. We held regular meetings in our office with the heads of the utility companies, the police, bus companies and emergency services to get agreement on each station layout. Once agreement had been reached all parties signed the agreed plan. This worked without a hitch.

The railway was opened to public use to Tsim Sha Tsui in December 1979 and to Central in January 1980. This was two months ahead of schedule and the total cost of the system was within our original estimate.

In conversation with Allan Blaza