In conversation with Allan Blaza 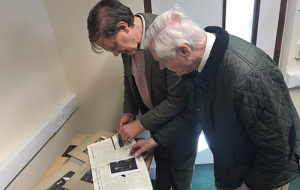 Allan Blaza came up twice to Univ, first in 1943 for the RAF short course, then to read History after the Second World War. He attended Normanton Grammar School (now Outwood Academy, Freeston) in West Yorkshire. He was the recipient of the first Oxford hospital administration bursary before leaving the NHS and opening the first branch of the Leicester Permanent building society in Oxford. He is a retired partner of Abson Blaza Associates. He was also President and founding member of Pontefract Civic Society, a registered charity promoting and supporting the well-being of Pontefract in all its aspects, and Chairman of Normanton Freeston Foundation, which supports Outwood Academy, Freeston. His wife, Shirley, was the first radiographer of the first geriatric unit to be formed in the country, in Oxford, at the Cowley Road hospital (formerly the old Oxford workhouse).

The following extract is from an interview that took place in College, facilitated by Dr Robin Darwall-Smith (1982, Classics), College Archivist, with Mr Blaza’s son Hugh Blaza (1971, Law) in attendance.

How did you come to know Univ?

It was through the historic close link between Normanton Grammar School and Univ, established in the late 16th century by a wealthy Elizabethan entrepreneur, John Freeston, who founded the school and was also a substantial benefactor of the College. In 1943 I was 18 and in the school Air Training Corps (ATC) with a keen ambition to become a pilot in the RAF. The Headmaster, John Holden, was also Commandant of the Corps and suggested that I apply for entry into the RAF for flying duties via an RAF Cadet Short Course available at Oxford and Cambridge Universities – and one or two others. (There were similar courses for the Army and Navy). Oxford and its Air Squadron (OUAS) and Univ, of course, were my choice. I was excited when I was accepted.

I get the impression the cadet course was a mixture of military training and a bit of academic work?

Yes, over its six-month course from Michaelmas Term 1943 to the end of Hilary Term 1944 I both read Military and Naval History (with unforgettable lectures and tutorials from Exeter College’s eccentric C T Atkinson) and, as a member of OUAS based in Manor Road, I undertook the RAF’s Elementary Flying Training (EFTS) curriculum featuring flying solo in a Tiger Moth. Saturday morning drill, in RAF cadet uniform, on Broad Walk by Christ Church Meadow Building was a refreshing exercise at the end of the week although not immediately to the satisfaction of the RAF Corporal in charge! Both activities brought to an end schoolday life and quickly opened a door on an adult world.

So, you enjoyed your first six months as a kind of taster?

Indeed, and of a world so different from what I had known before. Univ – and Oxford – made an immediate impact and, as the Short Course came to an end, there was the hope that if one survived the war, I would be able to come back to them both!

During that time, was John Wild generally looking after the College day to day? And, of course, he was Master when you came back.

He was Dean in those days and Chaplain, and responsible for air raid precautions as well, with a special regard for the roofs. I was in his roofs’ protection team when, equipped with hand-held stirrup pumps and buckets of water, we would climb onto the roofs for practice. Happily, no occasions arose for the real thing. (I often wondered how effective our efforts would then have been). At the end of practice, John would invite us to his rooms for tea or coffee, with the entreaty; “Don’t forget your rations!” (They were pretty meagre, including sugar and butter which we carried into Hall on a plate from our rooms for breakfast and dinner). John was very much liked and it was good to see that he had become Master when I came back in 1947.

I can imagine that JCR being a sort of fog of cigarette smoke.

Cigarettes, of course, and pipes. I smoked both, and enjoyed experimenting with different brands enticingly on display at Fribourg & Treyer’s shelf-packed small shop on The High near Carfax. Wherever one gathered in numbers in those days in a confined space, tobacco smoke filled the air. We all were ignorant of the danger to our health. There was a national annual award: “Pipe Smoker of the Year” presented one year to the then Prime Minister, Harold Wilson (Fellow and Domestic Bursar in 1944).

You have people from very different educational backgrounds at Univ, how did you all get on?

Although coming up from a West Yorkshire Grammar School, I never had any problems fitting with people from other backgrounds, public schools, for example, and felt very much at home in Univ’s immediately welcoming presence. An added sense of camaraderie and fellowship was given on returning after the War among so many ex-servicemen.

Did you have many dealings with women when you were at Univ?

Yes, but none to the extent that involved their having to leave one’s rooms before Hall, or in need of climbing back in late at night. The most memorable occasions were Common Balls, the last being in 1950 with the lady who, in December that year, became my wife. Univ played a part in this, my having been introduced to Shirley the year before by a Univ friend, Michael Crowe, reading Greats. He was a neighbour and schooldays friend of Shirley in Wakefield.

We talked about The Masque of Hope in our correspondence. I think you’re the first person I’ve met who saw it.

It was a spectacular – and unique – occasion held on 25 May 1948 in the Radcliffe Quad and presented by members of the Oxford University Dramatic Society (OUDS) in honour of and before HRH Princess Elizabeth, the heir presumptive. I regret to say that I remember nothing about the specially-commissioned script, but I do recall that one of the cast was Robert Robinson, later to become the well-known broadcaster. I think the exotic Kenneth Tynan also had a part.

They used a real horse in the production, for the scene where St George rides in at the climax of The Masque. We think they must have opened up the gates of Radcliffe Quad and got the horse in that way, with a vet on hand to ensure there would be no accidents.

That was the only way. It was a very large white horse. The vet is to be congratulated for what he did!

Clement Attlee was the Prime Minister in your second stint. Did the College feel any sense of “gosh a Univ man is our Prime Minister?”

Yes, I think we did although with no political connotation. For my part – and remembering the visit of Princess Elizabeth to Univ and its close association with others: Harold Wilson and William Beveridge, for example – there was a real sense of pride in that I too was a Univ man.

Watch a BBC TV newsreel on the Royal visit to Univ at here.