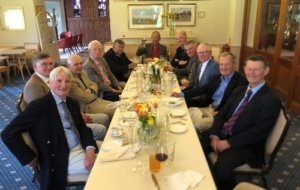 The spring USPGA meeting took place on 25 May at Royal Wimbledon Golf Club, kindly hosted by Anthony Young (1970, Plant Sciences), who has provided this report:

“16 Univ golfers assembled at a somewhat blustery Royal Wimbledon on 25 May for the latest meeting of the USPGA (Univ Society of Peripatetic Golfers Association). Unhappily, five (including overall winner David O’Neill (2004, Engineering), who scored a brilliant 38 points) had already left before the team photo pictured. Peter Fisk (1974, Chemistry) won the longest drive competition and Alistair Defriez (1970, PPE) won the closest to the pin competition, a ridiculous one foot from the hole!

“Oliver Stocken (1961, Maths) gets special mention for turning up for the lunch despite missing the golf on account of having to settle in the Ukrainian family who have just arrived to live with him.

On Tuesday 29 October the USPGA held its…

Univ golfers were invited to join…

We were delighted to welcome…