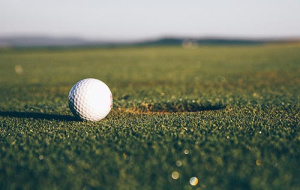 There had been no Spring Meeting this year due to Covid restrictions. 11 old members supported the event, with numbers made up with a Walton Heath member. We were honoured with the attendance of Kevin Garnett (Chemistry, 1969), a golfing blue. It could be said that Kevin has not since coming down dedicated himself as much to his art as others may have done, but his classic smooth swing was still much admired, particularly by our guest player, Robert Dyson, who remembered playing against Kevin at Porthcawl at the height of their respective abilities a few years ago. We enjoyed remarkably good weather for the time of year. Admittedly we started in fairly dense fog, but that did not seem to make much difference to the standard of golf and soon cleared to a warm, still and sunny morning. The New course was undergoing major works to install a new irrigation system which meant that the 18th hole was closed. But fortunately we were able to switch to the parallel 18th hole on the Old course to complete 18 holes.

Tim Low (Chemistry, 1976) won the USPGA Cup with a score of 35 Stableford points over the 17 holes on the New, 37 points if one included the 18th on the Old. Chris Ainscough (History, 1974), who credited the reduction in his handicap to time spent on his golf during the covid lockdowns, came 2nd. Robin Hollington was surprised to learn he had won the Nearest the Pin prize, which may have something to do with the fact that the fog was still in place when we played the short 2nd hole and as a member of the club he knew where it was.  The Longest Drive prize was won by the strong player Peter Button (Maths, 1975). It was a most enjoyable day and members were sad to leave after a long lunch.

The Spring Meeting next year is scheduled to take place at Royal Wimbledon.

All old members with a passing familiarity with the game are warmly welcome at these meetings. The golf is played in the very best of spirits and it is a good opportunity to catch up with friends, old and new.

Our thanks to Robin Hollington for both generously hosting the event and for this report on the day.