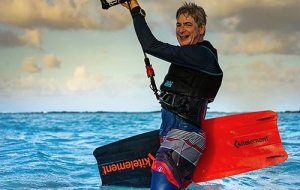 In this series we invited some of Univ’s entrepreneurs to talk about what inspires them and how they got started on their entrepreneurial journey.

Alan Jay (1980, Engineering) describes himself as an “Internet entrepreneur, technology guru, occasional filmmaker and kitesurfer.” With a background in finance and technology, developing publications and communities has been a core thread through his professional career. His first company PC User Group provided a forum for people to discuss the then new concept of IBM personal computers. This led to offering internet email (1987).

In the early 90s being one of the few people on the internet and having a love of movies from his time at Univ, he became involved in rec.arts.movies and what was to become IMDb (1996). He was a cofounder of IMDb.com building it into a business before selling it to Jeff Bezos at Amazon in 1998. Since then he has gone on to develop Digital Spy, a UK based entertainment news site which was sold to Lagadere in 2008, and now runs Sports Mole, a sports news site which he founded with Neil Wilkes, the editor of Digital Spy.

He has also produced a number of feature films and documentaries. He is a keen kitesurfer and one of the organisers at the London Kitesurfing Association.

“My time at Univ and at the University was very important to me. The things that I have become interested in over time have been driven by my love of and interest in technology and computers, although that was not what I was doing for my degree. There were no computers, for undergraduates, in engineering at the time, although I was part of the microcomputer society. We managed to find some computers in the Physics Department which we were allowed to use on special occasions!

“When I left Univ I had a summer job working for a TV production company as a runner however I ended up writing the specification for a computer booking system for them. I then went and did accountancy for two years and in the first summer I ended up writing a database for the firm’s training department to track the trainee accountants’ performance. While training to be an accountant I was involved with a computer user group and one day the person running the club offered me a job writing about computers for a newsletter. By 1985 we had 5,000 subscribers to the newsletter, and started offering internet email in 1987.

“We were at the forefront of the commercial Internet in the UK. The first two people to have commercial internet service were my company and one other, Demon Internet. Because of that I came across something which was later to become IMDb, the Internet Movie Database. We built a database on a Unix machine that I happened to have in my office that was connected to the Internet, so you could send an email to us and it would send back the cast list of a film or a person’s filmography. Very shortly afterwards the world wide web happened and the first graphical browser, and someone else created a website for the database. We spent six months trying to work out how to turn it into a company, which was a relatively tricky thing because there were twenty people involved in the project on five continents.

“We sold the company two years later to Amazon. In those two years we began to realise how ingrained IMBb was in the film industry. We would get invited to meetings with high level people at Studios who either wanted to praise how IMDb made their lives easier or complain that their A list Directors didn’t like the synopsis for their new movie (which wasn’t yet finished).

“After IMDb I came across a group of people who had a forum, but who were complaining that they didn’t have enough money to run it, so I gave them a hand up. Over time we turned that into a business, which we sold four or five years later – this was Digital Spy.

“You need very little resource these days to start something. My advice to aspiring entrepreneurs is that if you want to do something, go and try it, go and do it. If you can avoid taking external investment, it gives you control. I’ve been very lucky. At the time I got involved with IMDb I already had a business that was making some money. That meant that I could bootstrap a second business effectively off the back of the fact that I already had the infrastructure in place to support it.

“My current business has been virtual ever since we set it up. Keeping overheads as low as possible has always been my thing. Nowadays, with Amazon AWS, instead of a machine your database or content appears by magic, plus you only pay for the hours you use.

“If you can do something you enjoy, that is worth a huge amount. If it will pay you enough to afford to live in the style to which you want to become accustomed, even better!”