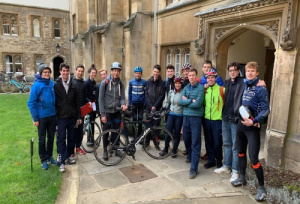 Univ triumphed at the cycling Cuppers held by OUCC (Oxford University Cycling Club) at the start of February.

25 riders took part in cycling Cuppers this year, which was a ten mile time trial just outside of Stadhampton on the HHC118 course. Univ won by only a handful of seconds, with Lincoln mistakenly being declared victorious before Univ was confirmed the winner.

“I’ve been riding for about 10 years. I live in North Yorkshire so the riding’s really nice there and I’d always had the ambition of starting racing when I got to university.

“Upon arriving in Oxford I met the coach and the training took a step up from what I’d been used to which was very much just casually spinning about the country lanes. I saw a huge increase in my fitness very quickly and at first it was difficult to balance a heavy academic schedule with my training but over the past two and a half years I think that I’ve found a good middle ground.”

Univ has a history of cycling success with a stellar performance in Cuppers last year. Rebecca took the women’s title with a time of 26:57. James King (2016, DPhil Earth Sciences), the current Oxford University Cycling Club President, placed fifth and Jack tenth in the men’s competition. This excellent performance meant that  Univ won all three Cuppers titles: men’s, women’s, and mixed.

The race to zero