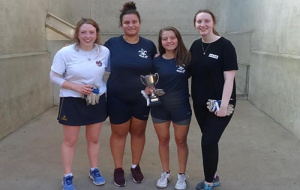 Eton Fives involves hitting a small, hard ball with gloved hands. It’s played in a three-sided court that has a step across it, a buttress, and plenty of ledges that add complexity to the game. Fives is played in “doubles”, with one pair pitted against the other.

Last week in the Mixed Pairs tournament, Marjolaine (partnered by Sam Oppenheimer) and Georgia (partnered by Jacob Greenhouse), who is currently Ladies Fives Captain, competed against each other with Marjolaine and Sam eventually taking the top spot.

In October, Marjolaine and Georgia retained the women’s trophy beating Helen Pugh (2016, PPL)  and Amelia, her partner from Worcester, in the final. Helen holds a full Blue and is Ladies Fives Secretary.

Last year, Marjolaine became the first woman to win the national U21s, U25s, Universities and Universities Mixed competitions. She is hoping to match the feat this year and we wish her the best of luck!

Welcome to the first of a series of regular updates…