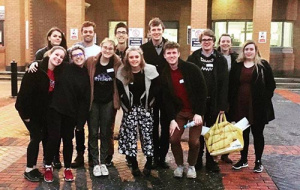 Oxford is a relatively new branch of the charity, Cambridge initiated the project in 2013 and have done an average of nine visits a year since then. The project has also spread to universities in London and hopes to grow across the UK.

Isabel commented on her eye-opening visit to the prison:

“This was the University’s second time visiting HMP Woodhill. The residents recognised all of the students who had come the first time, so the visit clearly had an impact! Many residents have said that they would now like to join a choir when they are released, which is fantastic.

“My own visit to HMP Woodhill was eye-opening. I had never been inside a prison before, and there is nothing that you can read or watch that captures the atmosphere. The residents and staff were all very friendly towards us and reiterated throughout the day how much it meant that we were there.

“The structure of the day itself was an hour of rehearsals, followed by a break and then repeated. The rehearsals were a lot of fun because everyone was very keen to sing at the top of their lungs and seemed to enjoy the music. During the day, including the breaks and lunch, students and residents mixed. This provided an opportunity to chat to the residents, and get a feel for life in prison. For me, it really stressed the importance of reform because life appeared to be pretty miserable. It also highlighted the luxuries that we have every day. Hearing music for us is easy; we sit down at a piano or turn to a device and hit play. For some residents, it was the first time hearing real music for many years.

“I really feel like it’s a cause worth protecting. The day seemed to have such a large impact on not only the residents but also the students. Seeing the inside of a prison, hearing stories from residents and driving away after being locked inside all day is an experience I can’t describe. I would really recommend it to anyone who is interested.”

Find out more about Sing Inside at singinside.org