In the latest of this series we invited some of Univ’s entrepreneurs to talk about what inspires them and how they got started on their entrepreneurial journey.

I was an undergrad studying Engineering at Univ from 2003 to 2007. I also rowed a lot and tried my hand at various other things with varying degrees of success/failure. After Univ I went sailing all summer, then went skiing for six months in Canada. Finally, I came home and landed myself a job at McLaren Racing, the F1 team. That job was advertised on the Oxford Careers Service website; it was several months out of date, but I thought it was worth a shot anyway. I spent two-and-a-bit years at McLaren, then resigned to come back to Oxford, and to Univ, to do a DPhil in Biomedical Engineering, which I thought would be a lot more useful, and thus more fulfilling, than making millionaires go around in circles slightly faster. I turned up at Univ for grad freshers’ week and then relocated to Canada again for another ski-season whilst working on my (simulation based) DPhil.

On my return from Canada I started doing some consultancy work for Ferrari F1 team, who had been in touch. This culminated in me running an office that Ferrari opened in the Begbroke Science Park for about 18 months, pretty much full time. My DPhil supervisor wasn’t exactly delighted about this but I assured him that I would hand in my thesis within the four-year time limit, so he was happy enough. I finished working in the Ferrari Oxford office and spent six months writing up my thesis just in time to hand it in before the deadline, at the end of 2014. 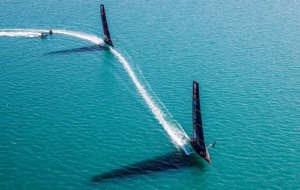 After a bit more Ferrari consulting, I met up with two former colleagues from McLaren and we decided that between us we had the skills necessary to build our own motorsports simulation platform, and that we could build it as a web app, with all the simulations running in the cloud, so it would be very powerful compared to other tools on the market. We incorporated Canopy Simulations Ltd on 5 December 2015 (six years ago tomorrow, as I write this). We created our platform and found motorsports teams, initially in F1 and Formula E, willing to take a risk on our newly formed company in return for access to the transformative technology we were offering. Since then we have added a lot of functionality to the platform and have a roster of customers that we are really proud of, with everyone from F1 to major OEMs (Original Equipment Manufacturers), to the majority of Formula E teams using our platform. We’ve even worked with Ben Ainslie’s America’s Cup team for two seasons.

If I were to offer any advice to proto-entrepreneurs at Univ (which I am only doing under duress), I would say two things:

1. It’s not hard to start a company, you don’t need anyone’s permission to do it, and you don’t need any particular qualifications either – just do it.
2. Starting a business doesn’t have to involve VC money and elevator pitches and the whole “startup” circus, you can just make stuff that people want to buy and sell it to them.