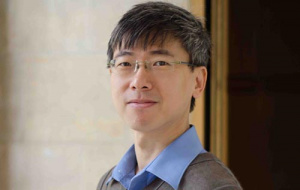 Congratulations to Professor Yee Whye Teh, Univ Tutorial Fellow in Statistics, who has been named as one of the inaugural Faculty Fellows of the new Alan Turing Institute, the UK’s national institute for data science.

Univ Tutorial Fellow in Statistics and Professor of Statistical Machine Learning Yee Whye Teh has been named as one of the inaugural Faculty Fellows of The Alan Turing Institute. The Fellows are faculty staff in data science who will be spending a significant amount of time engaging with institute activities. By drawing upon the combined expertise of Oxford, Cambridge, Edinburgh, UCL and Warwick a unique range of skills and backgrounds are represented, ranging from branches of the Computational, Mathematical and Social Sciences.

Professor Yee Whye Teh said, “The Alan Turing Institute is the UK’s national lab in data science. Our society is becoming increasingly digital, and there is much data generated which allow us to peak into natural and social processes with unprecedented fidelity and depth. The analysis of such data will drive new understanding of such processes, and drive progress in science, technology and society as a whole. I am very excited to join in the research effort at the ATI to develop the next generation of theories, techniques, and tools for data science.”

The Alan Turing Institute’s mission is to “undertake data science research at the intersection of computer science, mathematics, statistics and systems engineering; provide technically informed advice to policy makers on the wider implications of algorithms; enable researchers from industry and academia to work together to undertake research with practical applications; and act as a magnet for leaders in academia and industry from around the world to engage with the UK in data science and its applications.”

Professor Teh’s research interests are in machine learning, the study of how to get computers to extract useful knowledge from raw data. It is an inter-disciplinary area lying at the interface between statistics, computer science, engineering, cognitive science and neuroscience. His particular interests are in using a statistical theory based on Bayes’ Theorem to frame the learning problem, and in deriving efficient computational procedures of turning theoretical models into practical learning systems, and in applying these systems to problems in linguistics, genetics and perception.

Professor Teh is a European Research Council Consolidator Fellow. He also holds an honorary appointment at the Gatsby Computational Neuroscience Unit, UCL. From 2007 to 2012 he was Lecturer then Reader of Computational Statistics and Machine Learning at the Gatsby Computational Neuroscience Unit, UCL. Prior to UCL he was Lee Kuan Yew Postdoctoral Fellow at the National University of Singapore and a postdoctoral fellow at University of California at Berkeley working with Michael I. Jordan.