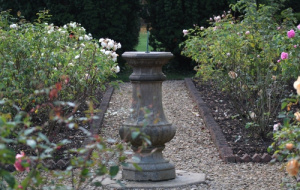 The Rose Garden at Staverton was first laid out when the house was built in the early 1900s. The design hasn’t changed much over the years apart from the disappearance of a previous entrance to the garden in the northeast corner from the path that led to the “wild garden” and eventually to the orchard and greenhouse.

The four main borders were replanted about 15 years ago, and the edging was replaced (originally it was grey wavy edging). Each border contains a different colour of bloom (red, pink, white and orange/yellow). All the beds were replanted with roses bred or introduced before 1914 which tied in with the historical aspect of the garden. In our records, varieties planted in the renovation include types such as shrubs, hybrid teas, floribunda, gallica and moss roses. There are climbing and rambling roses on pergolas all-round the area, which looked (and smelt!) superb when in full bloom. Bulbs of Scilla in the borders as well as Hyacinths, Alliums and Narcissi tucked within the borders create seasonal interest.

In the centre of the garden is a sundial designed by James Pulham, speaking to relatives of the previous owners it cannot be confirmed whether this was part of the original design or added later, research into its origin but with no definite answer yet! Research done by OM Greg Birdseye (1965, Physics) has revealed some interesting information about the maker of the sundial. It is unknown who the gardener of the original owners was but for 25 years it was managed by John Pitts until his retirement in around 2007.

As far as maintenance of the area is concerned, the usual rose growing tasks are carried out. This includes an annual prune, feeding twice a year, deadheading the spent blooms and mulching the plants twice a year. Pest and disease-wise, occasionally we are affected by rose blackspot (due to historic non-blackspot resistant varieties being grown) and in recent years rose sawfly has appeared. 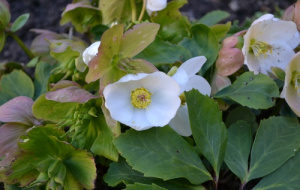 When the borders were designed with the different colour schemes many of the species included the following:

Read more about the College’s vision for a second community on the Univ North microsite.

The Rose Garden Sundial at…