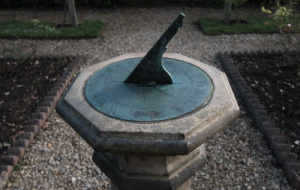 The Rose Garden sundial at Redcliffe-Maud House in Stavertonia has long remained a source of mystery. OM Greg Birdseye (1965, Physics) has been doing some research that begins to shed some light on its origins.

The maker’s name on sundial plate is PULHAM & SON, 71 Newman Street, London. But, there is no other inscription/motto or date.

The Biographical Index of British Sundial Makers provides some detail about Pulham & Son. James Pulham and Son exhibited and won medals for their rockeries and ferneries at London’s Great Exhibition of 1851 and 1862 International Exhibition. In 1895 the firm was granted a Royal Warrant by the Prince of Wales, later King Edward VII, and some of their work survives at Sandringham House and Buckingham Palace. However, BSS only records one registered Pulham & Son sundial in Devon.

Most of Pulham & Son’s work involved the construction of rock gardens, which they made using natural stone and their own artificial stone. This special artificial stone was called “Pulhamite”. It looks like gritty sandstone, even fooling some geologists of the era. The formula was never revealed, though modern analysis of surviving original Pulhamite has demonstrated it is a blend of sand, Portland cement and clinker over a core of rubble and crushed bricks.