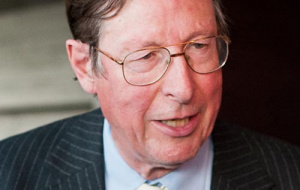 An extract from Sir Max Hastings’ (1964, History) new book, The Secret War: Spies, Codes and Guerrillas 1939-1945, was published in The Times recently.

The Secret War surveys the impact of various secret services on events in the Second World War, focusing on intelligence in Britain, Russia, Japan, Germany and America. It examines the ways in which battles were fought behind the front-line, concentrating on spies, code-breaking and partisan operations. For more information on the extract, please visit The Times website or here for a video introduction to The Secret War.

Sir Max Hastings was a guest on Stories from the Frontline on BBC4 on 22nd September, and took part in an hour-long studio discussion on the experience of war corresponding with John Simpson, Jon Snow and Christiane Amanpour of CNN. The programme was followed by a screening of Max’s 2012 BBC TV documentary “The Falkland’s Legacy”.

Sir Max Hastings is a broadcaster, journalist and author, who currently writes for the Daily Mail and the Financial Times, as well as writing book reviews for The Sunday Times and the New York Review of Books. He has published a total of 23 books and gained notoriety by originally working as a foreign correspondent for the BBC and the London Evening Standard. Sir Max has reported on events such as the Vietnam War and the 1982 South Atlantic war and has gained prizes for his literary and journalistic talents. In 2012 the Priztker Military Library of Chicago presented him with its $100,000 Literary Award for lifetime achievement and in the same year he was awarded the Duke of Westminster’s Medal for Military Literature for All Hell Let Loose (2011).