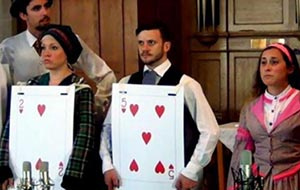 Univ Old Member Michael Brand (1971) is delighted to bring his latest musical – CLD – The Real Lewis Carroll to Oxford from 14 July to 6 August 2016.

The musical is being produced by Oxford Music Theatre with a professional cast at St Columba’s United Reformed Church in Alfred Street (next to the Bear Inn).

Old Members may remember Michael’s first musical Zuleika, written with Univ colleague Reggie Oliver and produced by Jon Plowman for the Univ Players in 1974. It was based on Zuleika Dobson. Michael claims that it was this show, which ran at the Playhouse, which started him on the slippery slope of writing musicals and from which he has never fully recovered! Reggie and Michael started conceiving the show when they were guests at the Chalet and wrote it that autumn.