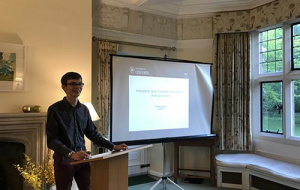 The Martlets Society meets three times a term, hosting talks by postgraduates at Univ on their chosen area of research. Thank you to Leonardo Buizza (2017, DPhil Physics) for this report.

The 2018-19 academic year saw another series of wonderful Martlets Society talks, kindly hosted by Lady Jill Crewe in the wonderful setting of the Master’s Lodgings. The talks have been as thought-provoking and wide-ranging as ever, with a total of nine students speaking across the three terms.

Miranda Gronow (2017, MPhil/DPhil Classical Archaeology) gave the first talk of the year. Her topic managed to combine neatly her academic interests with a broader history of Australia. She covered the spread of utilitarian approaches and panopticism in Australian prisons through the eighteenth and nineteenth centuries. A few weeks later we moved seamlessly to hearing about the famous 1883 eruption of Krakatau from Amber Madden-Nadeau (2015, DPhil Earth Sciences). A combination of clearly-communicated science and some beautiful pictures made this tricky topic all the more interesting. Although attendance dropped off as people’s minds started to tire and think about mince pies towards the end of term, the final talk of Michaelmas was no less fascinating. Farsan Ghassim (2015, DPhil International Relations) discussed his most recent survey work that tried to assess the age-old question of global governance across populations in many different countries.

Hilary term began with a decidedly historical bent, with Grace Mallon (2015, DPhil US History) covering how American policy on Native Americans evolved in the early republic. This tricky topic that is often neglected was presented in a nuanced, thoughtful way, offering fresh perspectives on the role of state and federal government in the United States. Although the next speaker was also studying for a DPhil in International Relations, the topic covered by Miles Kellerman (2017, DPhil International Relations) could not have been more different to that covered by Farsan at the end of Michaelmas term. Out was global governance, in was cross-border regulation of financial crime. Another topic that often has high barriers to entry was explained masterfully, spurring plenty of engaging questions and discussion at the end. To round off Hilary term, we jumped back into the realm of heavy-duty science, with Hannah Farley (2012, DPhil Medicine). Hannah walked us through the intriguing topic of left-right symmetry in the body, and how this links to the underlying genetics that she studies.

The scientific trend continued on into Trinity term, with veteran attendee Staszek Walsh (2015, DPhil Theoretical Chemistry) presenting a talk on quantum mechanics and many-body localisation. The title may have seemed impenetrable, but Stash’s excellent approach to visualising some tricky physics and maths meant that the whole audience was able to follow his hugely engaging presentation. The next talk of term gave Martlets convenor Rob Scanes (2015, DPhil Chemistry) a fitting chance to bid his farewells. A talk on the intriguing topic of the origins of life was very well-received, and we are all very thankful to Rob for his contributions to running the society over the last few years. Finally, the term ended with some more beautiful photography as Ellen Jones (2016, DPhil Egyptology) presented some incredible images from her field trips to the famous temple at Karnak. Not satisfied with just photos, some great science and software then lay behind more detailed analysis of graffiti that she found during her investigations.

All in all, another wonderful year of talks.

On Tuesday 29 October the USPGA held its…