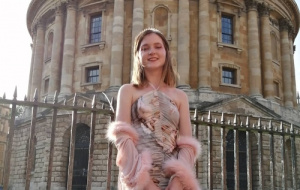 Hannah Bradburn, a student ambassador, is in her final year studying English. She has been President of the Univ Players as well as JCR Hall and Accommodation Officer.

Have you always been set on studying English, or did you take a while to decide?
I was in denial about the fact that I was going to study English for a long time. I wanted to study something that would lend itself naturally to a career and combed through university prospectuses looking for vocational subjects that interested me for a good couple of months – I even started writing out a personal statement for criminology before the UCAS deadline approached and I finally accepted that English was the only thing I could study for three years without getting bored. The lack of an obvious career path post-uni no longer worries me as much; choosing English was a way of keeping my options open whilst I take the time to decide what I want to do with my life. 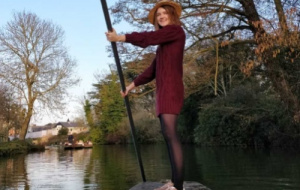 Punting on the river

Why did you choose Oxford? What made you choose Univ?
Since reading Philip Pullman’s His Dark Materials as a child, I had this romantic notion of Oxford as a place to be read about and admired from a distance, and it wasn’t until one of my secondary school English teachers suggested it to me that I started to visualise Oxford as a place I might actually live and study. After attending an outreach day run by the English faculty and then a University-wide Open Day, I had my heart set on it. My reason for choosing Univ was less romantic – it was the only college I visited on the Open Day to offer me free cake. I can’t imagine being anywhere else now though!

Was there a particular area of your subject that you were interested in before you applied?
One of the best things about studying English is that it gives you the freedom to write on pretty much whatever you want, and so I’ve consistently been able to submit essays on the subjects that interest me. While I couldn’t identify a single area that I’ve focused on in particular, the flexibility of the course has meant that I’ve written essays on everything from the books I read and loved as a child to a tweet I found particularly amusing. 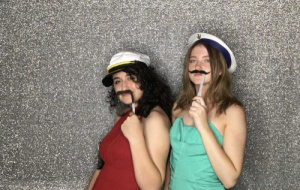 Dressing up at a ball

How do you think you have changed since walking through Univ’s doors as a fresher?
One thing Univ (and Oxford as a whole) is really good at is pushing you out of your comfort zone, and so the big change in me has been in my confidence. I used to really struggle talking to new people but that had changed within weeks of being here – the Univ community is so friendly and welcoming that it wasn’t difficult for me to settle in socially at all.

What else do you do apart from your subject in Oxford?
I do a lot of drama. In my first term I was involved in Cuppers – since then I’ve done college-based comedy and last term I directed a play and took part in two garden plays across Oxford. It’s my favourite way to escape work for a while and I love the adrenaline rush before a performance. I also took up pole dancing and language lessons at the Language Centre at the start of this term – both are proving to be challenging in their own ways!

Has anything surprised you about Univ?
The bit of grace after the first amen in formal hall surprises me every time. 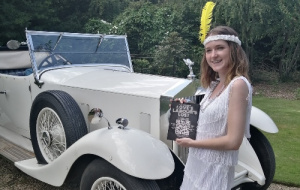 After a performance of Love’s Labours Lost in July

Have you faced any challenges in your time at Univ?
I have struggled with anxiety for as long as I can remember, and whilst it had always been a frustrating but manageable aspect of my life, it became fairly debilitating over the summer before I started my second year. Michaelmas term that year was the first time I felt that I was surviving rather than thriving at Oxford, which was difficult because so much of the discourse surrounding university experience places an expectation on these three years being the best of a person’s life. But I muddled through with the support of the college counsellor, the nurse, and my friends, and I’m doing better than I ever was! My anxiety is still there, but it’s back to being a background noise that mostly lets me enjoy my time here uninterrupted. The importance of college welfare can’t be understated; I don’t know where I’d be without the support network Univ offers.

How do you feel about the celebration of 40 years of women at Univ?
40 years isn’t a very long time! It’s something like one nineteenth of Univ’s history. Listening to Amanda Brookfield speak at Women’s formal last year about her experience of college as one of the first women to study here, it was clear to me that we’ve come a long way in that short time, but equally that we still have ground to cover. Misogyny, whilst no longer as blatant, exists in a more insidious form across Oxford. You see it in the attitudes of some fellows, whose generational difference to the students is held as an adequate excuse for outdated opinions. You see it on sports crewdates in the behaviour of some male students, for whom women are a sexual conquest and little more. And more and more you see it in the dangerous backlash against Oxford’s attempts to become more diverse, with women’s achievements in their successful applications to the university being dismissed as part of a ploy to fulfil admissions quotas. After all, how could we ever be competent enough to get here on merit alone?

Moving forwards, we have to tackle these more subtle examples of misogyny. We have to examine misogyny in all of its manifestations – especially the way in which it intersects with classism, racism, homophobia, transphobia and other forms of discrimination. We must fight for women who are less socially palatable in their deviation from what is expected of an Oxford student. And we are compelled to continue to tackle all of the challenges offered to us by an age-old institution which has only recently opened its doors to the “fairer sex”.

These are Oxford-wide problems, of which every college is microcosmic. The arrival of Baroness Amos as Univ’s first female Master (and indeed the first black head of any Oxford College) is demonstrative of a long overdue desire to catch up with the outside world, but we can’t read this as a guarantee of modernity. The problems outlined above are still very much alive and well in Oxford. There is still work to be done.