Lessons we should have learned 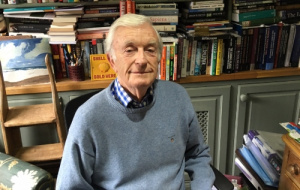 Professor Michael Jefferson (1959, PPE), Professor at ESCP Europe Business School, has written an article in Biophysical Economics and Sustainability about the lessons we should have learned and applied to the COVID-19 pandemic from the existing literature on pandemics. He was previously Chief Economist of The Royal Dutch/Shell Group and Deputy Secretary-General of the World Energy Council.

In his article, Professor Jefferson considers a core of twelve books on epidemics and pandemics and the guidance they might, and should, have provided on the sources, spreaders, and responses to COVID-19. A substantial amount of guidance is given in these and other sources referenced, which, he argues, if followed would have reduced both spread and mortality, but in far too many countries preparedness and speed of responses were inadequate. He concludes that an effective global network and funding are required, as long advocated, but still not implemented.

Professor Jefferson spent ten years at the World Energy Council, where he began working with the Intergovernmental Panel on Climate Change as Contributing Author, Lead Author, Editorial Reviewer, and Expert Reviewer. He received the IPCC’s certificate for his contributions to their award of the Nobel Peace Prize in December 2007. He has written extensively on energy policy, including contributions to various UN bodies, and was for many years involved with the World Renewable Energy Network and Congresses. Professor Jefferson was a Senior Editor of Energy Policy between 2013 and 2019.

You can read the article online.

With Love, from Univ.

It would be fair…