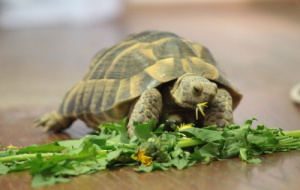 It would be fair to say Percy has had some 12 months in limbo following his relocation from the refurbished Lodge. Having completed his 2019/2020 hibernation, a couple of months in a fridge at 4°C to 6°C, he was awoken at the end of February where he spent time wandering around the Works department’s office, until lockdown was announced and the College began to empty.

Not being eligible for furlough nor enabled to work from home, it was decided Percy would summer with me. Some might say this was down to the Davies family having had a tortoise for some 50 years, others, a sense of duty or maybe even a short straw. Whichever was the case, Percy was relocated yet again. 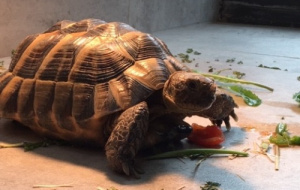 Heat lamps were set up, newspaper was put down (it didn’t work), cardboard box houses were strategically positioned and so began Percy’s summer in East Oxford.

Introductions were made with the neighbour’s cat, resulting in both parties rapidly losing interest in one another. Dandelions became a commodity sought out on every walk, the flowers seeming to be his favourite. 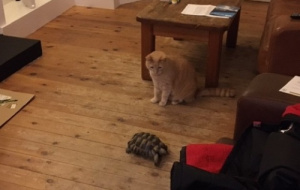 The height of the fireplace hearth was gauged, whereupon scaling it became Percy’s priority, with a number of attempts ending with him having to be righted. The single step down into the kitchen was more manageable, descent was achieved with a belly slide and ascent requiring some flailing of legs until tipping point was reduced and all four feet made contact with the floor again. The threshold to outside was a simple up and over giving way to the terrace, the makeshift barrier around the edge was repeatedly probed by, what we came to learn, was a seasoned escape artist.

As the weather warmed, the morning ritual of 20 minutes under the heat lamp gave way to 5 minutes while devouring his leafy breakfast in readiness for his day of trundling back and forth, looking out for anything left on the floor that might be worth climbing over, for no apparent reason. It must be said he wasn’t above nipping the odd toe, never a good idea when the toe belongs to Mrs Davies, who at the time was preparing his breakfast! 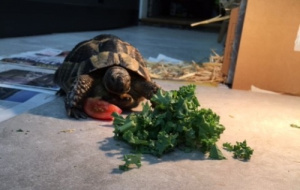 In the meantime College officers were considering his welfare and it was decided he must have a proper enclosure. Advice was sought from the local reptile veterinarian, following which a sunny corner in the Master’s garden was found and two cold frames were kindly donated by the Grounds and Gardens team (it was more of a hostile takeover to be quite honest), which would be turned into a staged, heated indoor space, giving way to an external enclosure.

As the days began to cool so did Percy’s exertions and slowly but surely not even the heat lamp and a dandelion flower could tempt him out of his box. While work continues on his new home in College, a look out of the Buttery will show you the progress. Percy and I are still keeping one another company, although he from his fridge in the corner of my office and with me monitoring the thermometers.

Therefore in answer to the many questions I’ve received about “How’s Percy?” I like to think he’s one of the few who has benefitted greatly from lockdown and will do so again in the New Year in his new enclosure.

Whether Percy misses his time in the Lodge is obviously a question for him, and we’ve yet to inform him about Clement Cattlee. Strange times indeed.

The Big Gap in Discrimination Law

The Green Agenda: Will COVID-19 Help or Hinder?