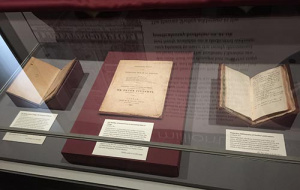 The Bodleian Library has just acquired its 12 millionth printed book: and it is a formerly-lost work by Univ’s own Percy Bysshe Shelley.

The pamphlet entitled Poetical Essay on the Existing State of Things, was written by “a Gentleman of the University of Oxford”, but it was attributed to Shelley 50 years after his death. It was printed in 1811, during Shelley’s first year as a student at University College and addresses themes such as the abuse of press freedom, dysfunctional political institutions and the global impact of war which all featured in his poetry throughout his career. The pamphlet was thought to have been lost but it was rediscovered in 2006 and now, thanks to a generous benefactor, it’s freely available to everyone in digitized form online. The pamphlet is also on display to the public right now from 11 November to 23 December in the Blackwell Hall of the Weston Library (under a cloth to protect it from the light).

At an event announcing the acquisition, current Univ students Daisy Hayes, Seamus Lavan, and Ben Norbury read from Shelley’s work alongside Univ’s Professor Nicholas Halmi and the actress Vanessa Redgrave. Redgrave described Shelley as “intoxicating”. She added: “His words transport you. I’m thrilled that, thanks to the Bodleian and its generous donors, this long-lost poem of Shelley’s can be studied by students all over the world.”