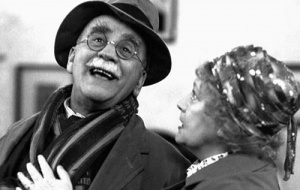 The College regrets to announce the death of the actor Warren Mitchell (1944).

He was best known for his memorable performances as the splenetic and bigoted Alf Garnett in the television sitcom “Till Death us do Part”. Born Warren Misell, Mitchell came up to Univ. in the summer of 1944 as an RAF cadet student to study science. He also rowed in the College’s Second Eight. However, he was soon drawn to a career in acting, and after the war, chose not to resume his Oxford life, but instead joined RADA. Mitchell and the College lost touch for several years, but we resumed contact around the turn of the millennium. He was delighted to have been rediscovered, and as well as submitting an entry to the Univ Directory published in 2000, attended several College events. Here are a few of the obituaries in tribute to Mitchell: