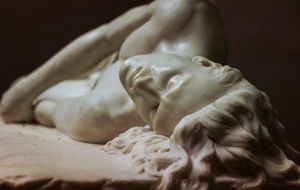 To mark the bicentenary of the death of Percy Bysshe Shelley (matr. 1810), we at Univ felt that we should play our part in remembering him. Back in 1992 we arranged a series of events relating to Shelley’s life, not least his turbulent time at Oxford, but this time we chose to concentrate on Shelley’s reputation after his early death. 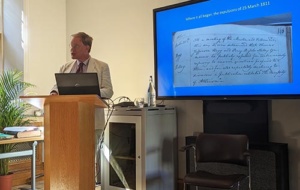 We were very fortunate to have two experts on Shelley and his life as our guests. The first of them, Professor Nora Crook (Anglia Ruskin University), spoke on “Mary Shelley’s Editorial Shaping of Percy’s Poetic Career”. Professor Crook showed how, immediately after Shelley’s death, his widow Mary edited a volume of his posthumous work which did much to make his name better known. In later years, in order to receive financial assistance for herself and her son from Shelley’s father, Mary Shelley had to agree not to publish any more of Shelley’s work, but Professor Crook showed the ways in which she unofficially helped others to do so. She also praised Mary Shelley’s skills as an editor, when faced with Shelley’s untidy and often illegible manuscripts.

Professor Richard Cronin (University of Glasgow) spoke on “Shelley’s Life after Death”. Professor Cronin showed that, at the time of his death, Shelley’s verse was generally little known, except for his more political work, such as Queen Mab. Over the coming decades, he showed how Shelley’s reputation diverged between the literary and working classes. The working classes, especially people like the Chartists, retained a greater interest in Shelley’s political poetry, with Queen Mab being published in cheap, easily affordable editions. The literary classes, however, tended to pass over Shelley’s radical politics, and concentrated on his more lyrical work. 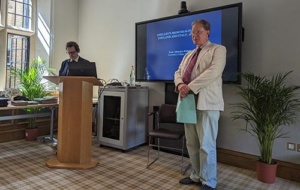 Nick Halmi spoke on “Shelley’s Memorialisation in England and Italy”. Nick once again showed how Shelley could be remembered in very different ways, in this case in England and in Italy, where he spent his last years. In England, Shelley was once again depoliticised, as it were, especially in the memorials erected by his daughter-in-law Jane which are now in Bournemouth and Oxford. In Italy, on the other hand, Shelley was commemorated by plaques placed on the houses where he lived. Many of them were erected in the later 19th century, the age of the Risorgimento, when Shelley’s radical politics and anti-clericalism received a more sympathetic reception, and so the plaques regularly praise Shelley’s love of liberty.

Robin Darwall-Smith spoke on “Shelley returns to Univ: the case of the Shelley Memorial”. Robin discussed the circumstances in which Jane Shelley, Percy’s daughter-in-law, came to present the Memorial to Univ, and its history in the College since then. On the one hand, there were at least three attempts by the Master and Fellows to move it to different places within the College; on the other hand, the Memorial has (at least until an alarm was installed) been the butt of many student pranks, some more outrageous than others. This anarchic relationship would have horrified Jane Shelley, but might have greatly amused her father-in-law.

About 35-40 delegates attended and, at the end of the papers, they were invited to visit the Memorial, which was specially opened up for the occasion. Many delegates who already knew the Memorial well were delighted to have the chance to get so close to it for the first time.

Professor Nicholas Halmi’s article on Univ’s Shelley Memorial first published two years ago on the Rêve (Romantic Europe: The Virtual Exhibition)website, has recently been translated into French, German and Italian.