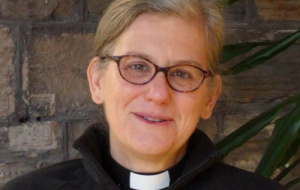 Revd Canon Dr Janet Williams studied Classics and Philosophy then a Masters Degree in Patristic Theology at Univ before completing a PhD in Religious Studies with the University of Winchester. After working (briefly) in investment banking and as a teacher, she was ordained in Gloucester in 2009. She is currently the Vice Principal of St Hild College.

How do you think you changed from walking through Univ’s doors for the first time to your graduation?
I arrived in Univ as a classicist, and left six years later as a theologian. It was George Cawkwell’s fault, really: I had asked for his advice about doing some graduate work on the philosophy of the late classical period, and he had counselled me to join the theology faculty as it was “their period”. All went as planned until the theologians asked me to read some of the early Christian mystics. I had never known before that this tradition even existed – I lost my heart to it, and am still searching.

How did you come to the decision to become a member of the clergy? Have you always felt a calling?
Ordination as a priest – for me – wasn’t a decision so much as a defeat, not a calling so much as an ultimatum. I grew up in a home culture of angry atheism (with good reason), and even angrier anti-clericalism. Even after being found by God, I never quite stumbled on a reason to give up the anti-clericalism. I was completely clear (I remember several vehement conversations in the chaplain’s rooms!) that my vocation was to be a teacher, not a priest.

It wasn’t until 2005, while I was enjoying a brief period of study-leave at Univ, that God took me by surprise and made it clear that I should do the work of a priest. That did involve an amount of humble-pie! But my first vocation remains – I am a teacher first, but a priest-shaped one. It’s a sign of the divine sense of humour that I’m now employed to teach and train priests for the Church of England.

Have you faced any challenges in your life that you are happy to share here? How did you overcome them?
The hardest challenges for me have been the times when I have lived or worked closely with people who were struggling with their mental health. By disposition, I’m a problem-solver, so I’m used to fixing things. Realising that people one esteems or loves are broken in ways that one can’t “fix’”is very hard. And again, for those of us who trust that “love is stronger than death”, finding that our friendship, our love, can’t heal the deep hurts of others – that’s a terrible truth to have to accept. I don’t think it’s quite accurate to say one can “overcome” such challenges. It’s more a matter of keeping faith with people, allowing the difficult fruits of such adversity to ripen.

What is your proudest achievement?
My proudest achievement is the series of lightbulb moments over the years of teaching: the young and not-so-young people whose eyes and faces have lit up as some connection is made. It seems like a kind of athletics – a kind of muscular strength of mind and heart being developed. Not simply mastery of facts, but love of the process of questioning, exploring, making sense; a felt sense of delight in discovery.

How do you relax?
I relax by walking and cycling; by singing (currently with the Mirfield Choral Society); by gardening and cooking.

Do you have any advice for current Univ students?
One of the things I learned as a classicist is the Delphic maxim “Know thyself”. Whatever your academic discipline, your greatest opportunity at Univ is to grow in self-knowledge.