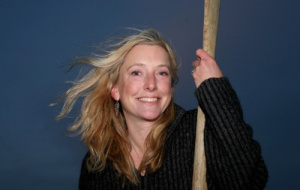 Roz Savage MBE FRGS is an English ocean rower, environmental advocate, writer and speaker. She holds four Guinness World Records for ocean rowing and was the first woman to row solo across three oceans: the Atlantic, Pacific and Indian.

Why did you choose to study Law? Do you feel it has helped you even though you didn’t become a lawyer?
In retrospect, Law was maybe not my strongest choice (and I suspect my tutors would agree). I originally wanted to do PPE, and should probably have stuck to my guns… but there again, per the time traveller’s dilemma, if I’d liked my subject better, I might have spent more time in the library and less on the river, and my whole life would have turned out very differently. And I’m now making up for lost time with PPE – essentially, my weekly blog post is a mini essay, usually on philosophy, politics, or economics, so maybe it’s never too late to be the student I wish I’d been.

What was your first session with UCBC like? Do you have any advice for rowers?
I well remember sitting in the bank tub at the side of the old, pre-fire UCBC boathouse, trying to get my knees and elbows in somewhat the right order. According to my very imperfect memory, Helena Miles was coaching. Rowing didn’t feel immediately natural, but I already knew that I was going to enjoy this.

As for advice, which I am always hesitant to lob out into the world, especially when I don’t know the people I am advising, I suppose I would say that I was lucky to be in the right place at the right time, but I also contributed a lot to creating that luck. Let me explain. At 5ft 4in, I’m really too short to be a first eight or university rower, even a lightweight (I rowed for OUWBC in my second year, OULRC in my third year), but I was super-keen and trained really hard, and when OUWBC was short of triallists I was fortunate that Tracy Bennett (now Muller) insisted I should give it a go. As the saying goes, fortune favours the prepared mind… and body.

Has sport always played such an important part in your life?
Honest truth: I was absolutely rubbish at sports at school. Lacking in eye/hand/ball coordination, short, couldn’t catch, couldn’t throw. (In fact, all of those are still true.) Having been somewhat body-dysmorphic throughout my teens, I only took up rowing when I got to Oxford because I wanted to be able to eat more without getting fat. I didn’t expect to actually be any good at it, let alone to enjoy it, which goes to show, it’s always worth trying something at least once, because as humans we’re very bad at predicting what we’re going to enjoy.

Do you think that exploring as a woman is a different experience from exploring as a man?
Somewhat impossible for me to say, because I’ve never explored as a man. But what I would say is that I feel very lucky to have done my adventures isolated on the ocean, far away from public scrutiny. On the boat my only communication was via a satellite phone, with extremely limited bandwidth, so all incoming messages had to be filtered by my shore manager (usually my mother) before transmission. This meant I was very much protected from most hostile commentary – the one exception being when my first attempt on the Pacific ended in failure, and me being airlifted by a US Coast Guard helicopter. Then, unfortunately, I got to see everybody’s opinion, and believe me, there were opinions. I have the hugest respect for women who are willing to step into the public gaze on a daily basis, because it can be brutal. But this I know: trolling says a lot more about the trolls than it does about the trollee. They are only projecting their own inadequacies onto the person (woman) who reminds them that they haven’t had the guts to get out there and give it a go.

What is your proudest achievement?
I am going to answer with two achievements, which might at first appear to be mutually contradictory. The first is completing the 3,000 mile row across the Atlantic, my first ocean. It was incredibly hard. The 2005-2006 season remains the worst ever for weather conditions. And I had an enormous amount of learning and growing to do, both as an ocean rower and as a human being. The second is the “achievement” of realising that it’s not what we achieve, but who we are, that matters the most. It’s so easy to pin our pride on our job title, or letters after our name, or some other externality – but it’s who we are when we’re alone with ourselves at 4am – or on our deathbed – that really matters.

What is a goal you hope to accomplish in the future?
I’m creating a global community of women, called the Sisters, supported by a complementary currency that recognises and rewards the behaviours that support a peaceful, fair, and sustainable future. I have a big, bold vision, and the path to get there is still very emergent, but I know I have the ability to achieve big, daunting goals – by simply taking a few steps/oarstrokes in the right direction every day.

How do you relax?
Last year I moved from the centre of Windsor out to rural Gloucestershire, and my resting heart rate dropped literally 10 beats per minute, overnight. Nature and walking are a hugely important element of my relaxation – I get out into the woods and hills for at least a one-hour walk every morning, rain or shine. Also hanging out with wonderful friends (IRL, and over video for the overseas friends), gardening, and making stuff.