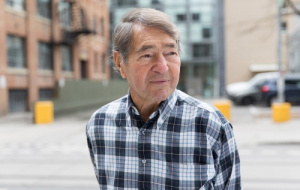 Jack Diamond is an award-winning architect. Among his many projects are the Mariinsky Theatre II in St. Petersburg, Russia; Sidney Harman Hall in Washington, D.C.; Jerusalem City Hall; and the Foreign Ministry in Israel. He is an Officer of the Order of Canada and member of the Order of Ontario.

What drew you to read PPE at Univ either side of your architecture degrees?
I was puzzled by those who considered various career choices: a person, I thought, was one thing or another, inherent in their make-up: an architect was not a choice for me. That’s what I am.

However, this did not mean confining my interests to a single field. There is, after all, a moral and professional imperative that takes the public interest into account.

Making a better world in South Africa clearly was to oppose the racism of the then nationalist government. This was of particular importance to me. As a Jew, I suffered from anti-semitism at school. However, this was far less of a problem than that suffered by people of colour, with which I unsurprisingly much empathised.

As a consequence I stood for and was elected to the University of Cape Town’s Student Representative Council. The SRC was active in opposing apartheid and creating places at the university for people of colour. In this work I came to realise that an architectural degree did not equip me to be as effective in governance as, for example, were law or social science students.

During a European rugby tour by a combined team of the Cape Town and Stellenbosch universities, I visited undergraduate friends at Oxford. Knowing of my political interests, and to give substance to my sense of social justice, they recommended taking the PPE course

Notwithstanding an offer in South Africa of a safe United Party parliamentary seat, which I declined as the policies of that party were simply not robust enough in its opposition to apartheid, I realised after withdrawal symptoms induced by the two year absence from architecture, that I could best serve career and public interests as an architect, not as a politician. 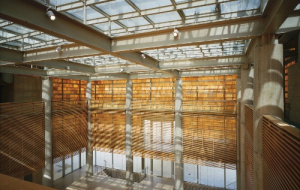 How do you think you changed from the first moment you stepped through Univ’s doors to your graduation?

While I was not changed the moment I stepped through Univ’s doors, it was pretty close to it: it occurred at my first philosophy tutorial. My tutor had given me a bibliography for the essay I was to write. I read the books, and wrote an essay I thought demonstrated my knowledge of the subject which the bibliography covered. There was a long pause. Eventually the tutor said “Diamond, I know all that. What so you think?”

While a critical facility was inherent for me in architecture, it was so natural that I had not realised how I now needed to consciously apply that to subjects and issues under review.

Clearly knowledge, as important as that is, is not enough: Knowledge must be accompanied by a critical faculty, if great insight is to be achieved. This lesson has served me well throughout my life. 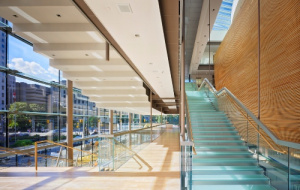 What is your most memorable moment from your time at Univ?
The most memorable moment was, when attending a small seminar on economics, I became very aware of an attractive, clearly very bright, young female undergraduate. However, there was no opportunity to effect an introduction. I subsequently discovered that she had the same philosophy tutor as I had. Attending a tutorial in the tutor’s house in North Oxford, I realised that the young woman was having her tutorial while I waited in the entrance hall. An overcoat was draped over the banister. I assumed it was the young women’s coat:I wrote a note and slipped it into a coat pocket. I heard nothing in reply. Subsequently I found out it was not her coat.

Not to be discouraged, when I again saw her in the the new Bodleian library, I asked her out for coffee. It took three tries before she accepted. She subsequently became my wife. In 2019 we celebrated our sixtieth wedding anniversary.

There was another memorable moment for me at Oxford. Notwithstanding the fact that I had played in the first rugby team at the University of Cape Town, that I had been a member of the Universities of Cape Town and Stellenbosch combined team’s European tour, and was invited to the Springbok rugby trials for an Australian tour (which I could not attend due to a broken bone in my foot), I was assigned to the the Greyhound team.

Oxford was scheduled to play the Wallabies on the Iffley rugby field. A week before the match, John Booth, who was the Blues right wing, the position I also played, was injured the week before the Australian match.I was then called on to fill his place.

The first of two tries that day did not call for anything more brilliant than to run a few yards to the try line. The second try I scored was quite different. After receiving the ball inside our half, I handed off a tackle by the opposing wing, outran the centres, and sidestepped the full back to dive over the line. The Oxford University side beat Australia that day.

Toft, the sports writer for the Observer, reported that I must have been the best reserve three quarter in the UK. He also described my hand off as “piston like”.

A satisfying outcome. As a consequence I became a member of the Blues team, and beat Cambridge that year.

What was your first commission as an architect?
My first commission was for a restaurant to be built in Albert Park, Durban, South Africa. At the time most of buildings and landscapes design seemed more suited to Liverpool, rather than sub-tropical Natal.

I, therefore, designed a building with delicately repeating seven concrete barrel vaults (2 1/2” at the apex, 7 inches in the valley), to provide shade, these were supported by slender steel columns. The public space of the restaurant was partially enclosed under the barrel vault roof, with glass sliding doors. This transparency, of course, made the park an element of the design, and induced cooling cross ventilation.

A non-bearing masonry wall screened the take-out counter. I designed an abstract bas relief for the wall, which I shaped in plaster. During the time I was on the scaffold building my 3D mural, senior architects from other firms came by to see what I was up to. Their embarrassment on meeting me in the process was amusingly obvious. 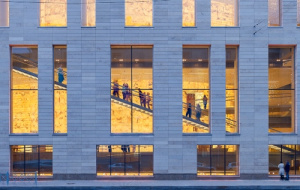 What has been your most challenging professional moment?
There had been two firms of architecture that preceded my firm for the design and construction of the new Mariinsky opera house in St Petersburg. Both had been dismissed from the project. A new competition was called, and we were selected for the project.

I immediately visited the site, and much to my surprise, there was a great deal of construction activity on the site. After frustrating inquiries I discovered that the supplier of theatrical equipment had cobbled together a consulting team and design, which had received construction approval. I pointed out, however, that my firm was selected to design and oversee construction of the project. The official to whom I spoke asked if I had construction approval from the “expertisers” in Moscow. As we of course were unaware of this situation, I had to acknowledge we had no such approval. In that case, the official said, they would continue with the approved scheme until we received approval for our winning design.

All the construction at that point was well below grade at minus twelve metres. I felt that at least until minus eight I would have a chance of adapting foundations for another design to our design. It was not until minus four metres that we received the official acceptance for our project. While the adaptation of a foundation for quite another design to our requirements will never be seen, it might very well be one of our greatest design achievements.

How do you cope with failure?
I have learned that one can learn at least as much from failure as from success. An unvarnished assessment of what went wrong is the first step to overcoming failure.

A second factor is that of persistence. That is, never to be discouraged by failure, but to use it constructively to point the way to success.

Do you feel a pressure while working on culturally significant buildings?
On the contrary, there is an exhilaration about working on such significant projects. We all want to have the opportunity to use our skills at their highest capacity. We all want to be engaged in work that is larger than ourselves. It is of profound satisfaction to respond to the Old Testament dictum, “tikun olam”, to make the world a.better place.

You can read more about Jack Diamond on The Canadian Encyclopedia.