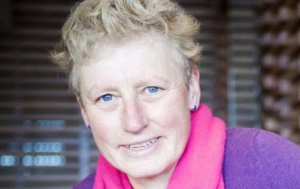 Univ OM Trisha Greenhalgh (1980, Medicine), Professor of Primary Care Health Sciences and Fellow of Green Templeton College, has been selected as one of only 24 sitters for Oxford University’s Diversifying Portraiture initiative.

The scheme, which aims to greatly broaden the range of people represented in portraiture around the University, is also set to feature BBC journalist Reeta Chakrabarti, human rights activist Kumi Naidoo and director Ken Loach, amongst others.

Professor Greenhalgh comments on her selection: “I was thrilled to learn that I had been nominated and then selected for the Diversifying Portraiture initiative. Oxford is one of the most vibrant and diverse intellectual environments anywhere in the world. Being selected is partly about improving the gender balance of the faces who stare down at the current generation of students, but it’s also about recognizing the more radical margins of academic work happening in Oxford.”

She continues: “The research unit that I lead within the Division of Medical Sciences (‘Interdisciplinary Research In Health Sciences’, IRIHS) seeks to go beyond conventional unidisciplinary research approaches and work creatively across disciplines and beyond the university’s walls to address major questions relating to health and care in novel ways. I’m pleased not so much for the personal accolade, but the fact that someone leading this kind of research has been selected as a role model at Oxford.”

Diversifying Portraiture is funded by the Vice-Chancellor’s Diversity Fund; it will see the new portraits shown at an exhibition in Oxford later this year and subsequently displayed in the University’s central public spaces. Professor Greenhalgh’s portrait will be undertaken by Indonesian-born artist Fakhri Bismanto Bohang, whose work is influenced by baroque portrait painters such as Velasquez and Zurbaran.