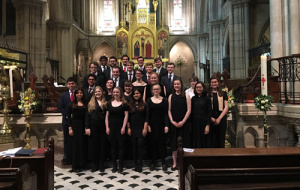 After singing for the Duchess of Cornwall at a private service in Florence last year, the liturgical side of the Univ Choir’s 2018 tour, to Paris, was a much more public affair. Appreciated alike by worshippers, and the no small number of tourists trundling that landmark church, was their evening service at La Madeleine. And on their toes, too, had to be the Choir, successfully to adjust their delivery to the 15-second-plus echo of this 100m x 40m temple originally intended as a memorial to Napoléon’s troops. Political correctness was harmoniously ignored with the inclusion of a reverberation-conquering rendition of The Lord’s My Shepherd by that most English of composers, Herbert Howells. 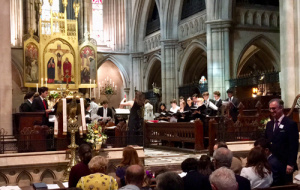 Earlier, local ecclesiastical correctness had also been completely swept away – this time by the congregation’s spontaneous applause in response to Tippett’s spiritual Steal Away, sung in place of a voluntary to end choral morning prayer at the American Cathedral. Completely unprecedented, said the Dean, as she announced an immediate invitation for the Choir to return as soon as possible. 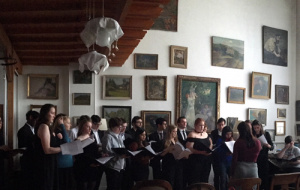 The finale was another private performance, this time to an invited audience (Univ Alumni included), in the drier acoustic of the atelier of Jean-Paul Laurens, a late 19th century Parisian painter, famous for his historical scenes. Backed by masterpieces, the Choir was led (as for all of this tour) by organ scholars Alice Habisreutinger and Stella Kremer. An hour of secular dexterity and diversity ensued: not just with English madrigals and songs (Holst, Vaughan Williams et al), but with the correct-in-at-least-two-senses delivery of some French motets (Duruflé). Concluding with more Tippett spirituals, the concert was a resounding success, generously followed by our host’s petits punchs all round.

As a college, we should be very proud of the fact that, under the direction of Giles Underwood and our talented Organ Scholars, our Choir now has the strength not only to be invited to sing internationally, but to adapt so musically to such different singing spaces as they encountered in Paris. Members of the Choir have commented on how these tours broaden their horizons – in many ways more than just musically.

We will publish details of future tours, and encourage local alumni to participate, and, if you know of two or three churches/private venues willing to host us over a long weekend, propose new destinations.