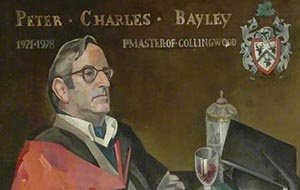 The College reports with great sadness that Professor Peter Bayley, English Fellow from 1949–72, died on 3rd November 2015 aged 94. He had been suffering from Alzheimer’s Disease for several years.

Peter first came up to Univ. as an undergraduate in October 1940 to read English, having been educated at the Crypt School, Gloucester. He was elected to a Sidgwick Exhibition, thanks to the intervention of the then Master, Sir William Beveridge. Peter always believed that his family would not have been able to afford to send him to Oxford without that exhibition, and he always held Beveridge’s memory in great esteem.

Univ in 1940 was still populated by legendary figures whose links with the College went back to Victorian times, including the philosopher A. S. L. Farquharson (or “Farkie”), elected a Fellow back in 1899. Farkie still invited freshmen like Peter to somewhat intimidating breakfast parties: in Peter’s case, he observed that he knew that Peter was reading English, and asked whether he could recite a poem impromptu to the assembled company (fortunately, Peter could remember one).

At that time, Univ did not have an English Fellow, and our English undergraduates were sent over to Magdalen to be taught by C. S. Lewis. Peter always spoke with warmth of Lewis and of his tutorials with him. He remembered Lewis as combative, but warm-hearted, and if Peter had read Lewis an essay of which he approved, Lewis would bring out a couple of bottles of beer for himself and Peter, and put them to warm by the fire before they enjoyed them.

After a year at Univ, Peter was called up on active service, and served in India. He returned to Univ. in 1946 to complete his degree, getting a First in 1947. He was at once elected a Junior Research Fellow, and also appointed Junior Dean. Two years later, in 1949, he was elected to a full Tutorial Fellowship as Univ’s first Praelector in English.

Peter held a great variety of College offices while he was a Fellow here. His roles included Junior Dean, Camerarius, Domestic Bursar, Fellow in charge of fabric, Keeper of the College Buildings, Senior Tutor, Tutor for Admissions, Librarian, and Editor of the University College Record. He took a great interest in the College’s art collection, helping run our JCR art collection for several years, and playing a leading role in encouraging the College to commission a portrait of William Beveridge. He also served as Proctor in 1957–8.

Undoubtedly, however, Peter’s greatest love was reserved for the theatre. During his first stint as an undergraduate, he started a play-reading society, which would eventually become the Univ. Players. As a Fellow, Peter gave the Players his continuing and enthusiastic support: he produced several plays himself, and even acted in them from time to time. Peter’s dramatic interests even extended outside Univ: he also acted as Senior Member of OUDS, and served on the Oxford Playhouse Management Committee.

The Univ Players put on several distinguished productions in the 1950s and 1960s, and several Univ members, such as Patrick Dromgoole or Michael York enjoyed successful careers as actors or directors. A Univ Players production of 1953 even gave an important career break to a young actress attending a training scheme at the Playhouse called Maggie Smith. An event that gave Peter especial pleasure in later life was when in September 2000 a group of former Players organised a Diamond Jubilee Conversazione in the Master’s Lodgings to mark the 60th anniversary of the founding of the Univ. Players. It was attended by over 50 former members (including our then Master Lord Butler), and presided over by Peter himself.

Meanwhile, in his scholarly work, Peter took most interest in the literature of the Elizabethan and Jacobean eras, especially in the work of Edmund Spenser. He produced editions of Books I and II of The Faerie Queene in 1965 and 1966, and in 1971 published a major study, Edmund Spenser: Prince of Poets. He also published books on Milton and Shakespeare and contributed a fascinating memoir of C. S. Lewis to the 1979 anthology C. S. Lewis at the Breakfast Table.

In 1972 Peter moved to the University of Durham to become the first Master of Collingwood College. Peter, a longstanding supporter of co-education in the universities, took great pride in the fact that Collingwood was specifically founded as a College for both men and women. In 1978 he then moved further north again, when he was appointed Berry Professor and Head of the Department of English at the University of St. Andrews. On his retirement in 1985, he returned to Oxfordshire, living in Woodstock until his illness obliged him to move to a care home.

Peter took a great interest in Univ. on his retirement, regularly coming into lunch in College when he could, and to the end of his life freely admitted his love for the place. When our Archivist, Robin Darwall-Smith, was working on his history of Univ, Peter’s support and advice were invaluable to the project.

He will be much missed by former pupils, Fellows and members of staff, and we extend our deepest sympathies to his family.

A full appreciation of his contribution to English scholarship, to the College and to the University will be published on the website, and in future issues of the College Record and The Martlet.

A memorial service was held in the College Chapel on Tuesday 24 November.