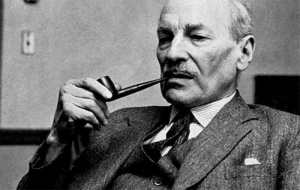 Newsnight celebrated the 70th anniversary of Univ Old Member Clement Attlee’s (1901, Modern History) election as Prime Minister of Great Britain (1945-51), exploring the legacy of both Attlee and William Beveridge, former Master of Univ. The hosts compared Labour’s unprecedented victory in 1945 with their comparative defeat in the 2015 election.

The programme also traced the old Univites’ contributions to the formation of Britain’s Welfare State and the relevance of their achievements in today’s government.

Clement Attlee, 1st Earl Attlee, KG, OM, CH, PC, FRS, graduated from Univ in 1904 with a degree in Modern History and went on to serve Winston Churchill in the wartime coalition government, before leading Labour to their outstanding victory in 1945.

Lord Beveridge, 1st Baron Beveridge, KCB, was a former Master of Univ (1937-44) who later assisted Attlee’s ministerial approach with published works such as Unemployment: A Problem of Industry (1909), Planning Under Socialism (1936), Full Employment in a Free Society (1944), Pillars of Security (1943), Power and Influence (1953) and A Defence of Free Learning (1959).