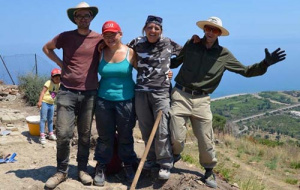 This July I spent two weeks in Sicily to join an excavation of the ancient Greco-Roman city of Halaesa. The site of Halaesa lies some 100 kilometres east of Palermo, and 160 kilometres west of Messina on Sicily’s north coast. With the terrain becoming mountainous immediately upon moving inland from the coast, Halaesa was built on a hill overlooking the sea which, at its peak, sits some 600 metres above sea-level. The city was inhabited from the 4th Century BC to the 4th Century AD, thus encompassing both the Greek and Roman periods, both of whose presence is visible in what remains today. 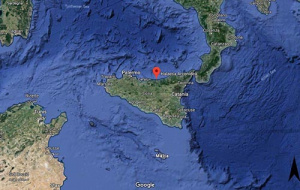 Halaesa is not hitherto unknown to classicists and archaeologists; the site has already been the scene of excavations in the course of the past thirty years. These excavations have focussed largely on the agora – the main public space for political and commercial transactions – and the areas of settlement around the principal streets. These areas lie towards the lower, southern side of the hill. This part of the settlement is open to the public, and a small antiquarium has also been set up to house finds of pottery, inscriptions, coins etc. which have been found amidst the excavated structures. 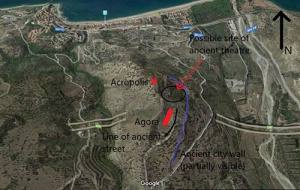 The acropolis area, on the upper, northern half of the city, has, since 2017, been the focus of a joint enterprise between staff and students of both the University of Oxford, and the University of Messina in Sicily; it is this team which I joined. The acropolis of Greek cities was typically the location of state buildings of significant prestige or importance to the city’s identity, financial interests and security – temples, sanctuaries, treasuries etc. On the acropolis of Halaesa is a series of maybe four or five buildings, the stone foundations of the principal one of which – speculatively thought to be a sanctuary to the Greek god Apollo – are still clearly visible above ground level. The principal aim of the current excavations in this area is to learn about the chronology of building activities on the acropolis, with regard both to dating the visible remains, and to situating them relative to any earlier structures which may have been removed / destroyed / built over during the period of the city’s occupation. 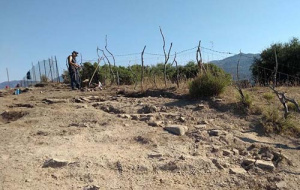 My first week on the site saw me clearing a previously untouched area of land on the very northernmost part of the acropolis of vegetation, and then cleaning away the soil due north of the building structures (which run in a north-south line relative to one-another) to see if there were any archaeological layers north of the buildings. We uncovered the a layer of a structure running north-south, perhaps 15 metres in length on the North-South line, 1 metre East-West, today seemingly terraced as it proceeds along the downslope towards the Mediterranean Sea in the north. It was composed of a combination of roughly worked stone and broken fragments of brick (the mortar still survives between bricks and stones). 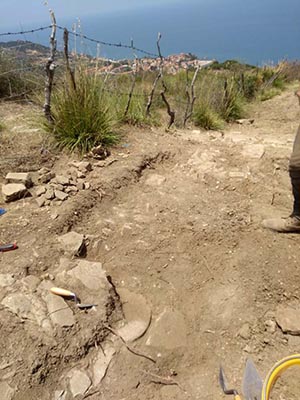 The materials have the air of being moved to their present location from previous buildings and re-used; this was nicely testified to when we found that a sector of a circular brick column base had been included in part of the structure. It is not yet clear what this structure is; most likely, we have the foundation layer of a wall (whether of a building, or possibly of some kind of support / buttress for one of the acropolis buildings cannot yet be said), or perhaps a set of stairs leading up to the main acropolis buildings from the north. Further excavations, both deeper, and in the areas adjacent to the uncovered structure, will be needed next year to answer these questions.

In my second week, attention shifted to the principal building structure on the acropolis, and to opening a trench down its east side. This trench was located where previously there was a neatly-worked stone pavement running alongside the building. 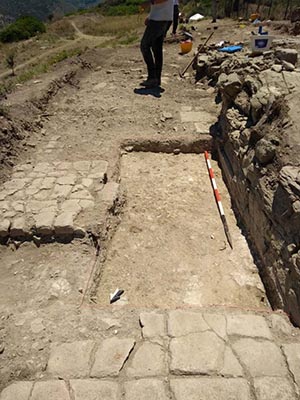 Some of the pavement remains, but other parts of it have vanished (including where we started digging), having been removed presumably at some point between the abandonment of the settlement in the 4th Century AD and the present day. As we were digging beneath the level of the surviving pavement – a major archaeological layer – we were therefore exploring a ‘sealed layer’, which we can be fairly sure has not been altered since the time the pavement was laid. What has become increasingly likely, as we dug deeper in this area, with brick, pottery fragments, mortar and plaster steadily coming out of the soil, is the view that there was a previous structure in the place of the now visible building remains, which were then discarded and/or re-used as a preparation layer, before the construction of the pavement, which is assumed to be roughly contemporary with the main building structure. 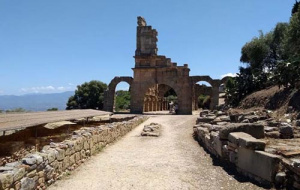 There was also the chance for a weekend visit about 80 kilometres eastwards down the coast to two other classical sites in Sicily, both more fully excavated than Halaesa and very rich in surviving material – the ancient city of Tyndaris and the remains of a beautifully decorated Roman villa at Patti.

I feel I benefitted from my experiences in Sicily in a number of ways. Firstly, it was invaluable to get some training in the methods, approaches, and practices of archaeology on a proper classical site, which has, until now, been absent from my classical education. 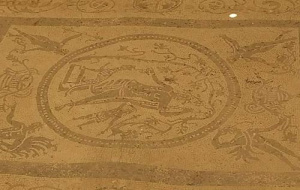 Secondly, beyond digging holes in the soil with trowels, the simple experience of the physical remains of a settlement of the classical world – the layout of an urban hill settlement, its situation within a mountainous, coastal region, the aesthetic appearance of the buildings which the inhabitants would have seen every day, the climate (often comfortably above 30°C in July), the ever-present features and artefacts of everyday life which have lower relative importance and visibility in our world today (in particular the amounts of pottery, and the huge, intricate mosaic floor decorations of public buildings and wealthy private homes) – adds a huge amount to the picture that, as an ancient historian, I am always trying gradually to build as I try to understand the conditions and circumstances under which real communities of human beings had to try to make their way in the world: the challenges that faced them, be it the weak soil of a hilltop, or the lack of good quality local stone; the decisions they had to make to meet their needs, such as how to acquire and transport materials for building and ceramics; the tools and means they had at their disposal, such as the animal power, human labour, ships etc.. Finally, I gained a huge amount from working, living, and interacting with our Italian colleagues from Messina. With few people on either English or Italian side who were properly bilingual, there was a welcome imperative to be pro-active in making some headway with learning Italian, which I had not previously studied. Italian is one of the major languages of Classical scholarship, and the encouraging and enjoyable start I have made to Italian, which I have continued working at since returning, is a useful step on the road to acquiring another valuable research skill in my post-graduate career. 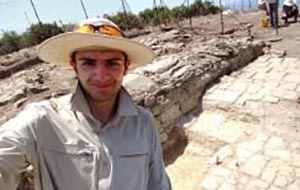 My trip to Sicily was a refreshing, rigorous, and highly engaging experience, which has really challenged me to be able approach my subject from new angles and perspectives, which cannot be easily be gained from studying out of books. I am very grateful to Univ for awarding me funding through the Old Members Trust Graduate Travel Fund, which enabled me to enjoy these two thoroughly memorable weeks.