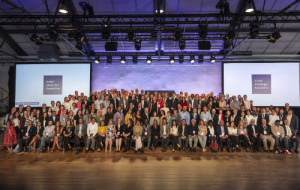 In late 2017, I participated in the New Shape Prize (NSP) – a competition to develop ideas for reforming our global governance system, including institutions such as the United Nations (UN) which have thus far been unable to satisfactorily address the greatest challenges of humanity such as climate change, poverty, and war. That is why László Szombatfalvy, a Hungarian-Swedish billionaire, decided to invest half of his fortune into an organization whose explicit aim it would be to find systematic solutions to the greatest risks faced by mankind: the Global Challenges Foundation (GCF). To my surprise, my idea – which I called Cosmopolitan Deliberative e-Democracy (CDeD) – was selected as one of the top 60 entries among more than 2,700 submissions. As a semifinalist in the NSP competition, I was hence invited to participate in a three-days conference and workshop, the New Shape Forum (NSF), in Stockholm (Sweden) from 27 to 29 May 2018. University College and, in particular, the Old Members’ Trust Graduate Conference and Academic Travel Grant generously supported my conference participation with a stipend of £350.

I spent a few very inspiring and productive days in Stockholm. The NSF gave me the opportunity to connect with like-minded scholars and activists from around the world, but also exposed me to new and innovative ideas on global governance reform. For instance, I was quite inspired by proposals for using blockchain and artificial intelligence as technological foundations to build a platform for bottom-up deliberation processes on global policy-making.

Beyond that, the working groups on days 1 and 2 of the conference allowed for delving more deeply into some of the ideas that were presented, enriching other people’s proposals with one’s own experiences and benefitting from feedback on one’s own idea. Beyond the NSF, the GCF is continuing its process of trying to find the best ideas for reforming global governance. In preparation for the Paris Peace Forum, which will be hosted by French President Emmanuel Macron in November 2018, GCF plans to support some of the working groups that emerged at the NSF. I look forward to future opportunities that may arise in this regard. Once again, I would like to thank Univ’s Old Members for the funding which received to participate in this inspiring and productive conference in Stockholm.