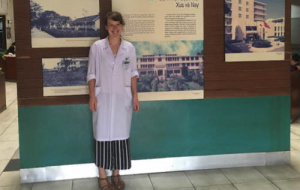 My main learning objectives for my elective were:

1. To gain experience of medicine in a resource-limited setting
2. To improve my practical skills ahead of starting work as a foundation doctor
3. To learn about the healthcare systems in Vietnam and Thailand and how they differ from the NHS in the UK

I spent the first half of my elective at Bach Mai Hospital, a large, tertiary centre in Hanoi, Vietnam. I spent two weeks attached to the Emergency Department and two weeks attached to Obstetrics and Gynaecology. In the Emergency Department, we saw a large number of trauma cases, particularly motorcycle accidents, as well as a spectrum of disease quite similar to that seen in an emergency department in the UK. However, many patients with chronic diseases, such as diabetes and COPD, present late and with multiple complications, as there isn’t a well-established primary healthcare system in Vietnam. Overall, the investigative and management options available to the doctors were similar to that seen in the UK, but there were some marked differences in practice. For example, many patients were subjected to awake intubation, and we observed a tracheostomy being carried out on the ward under local anaesthetic without so much as a curtain drawn around the patient for privacy.

As we were unable to communicate with the patients, we took on a mainly observational role. Ward rounds were conducted in Vietnamese, but there was a friendly group of junior doctors who spoke good English and were happy to translate for us. They would discuss patients with us and take us to see patients who had signs. We were also asked to do presentations on an assigned topic at “English Club” in front of the Emergency Department doctors, which was a bit daunting!

On Obstetrics and Gynaecology, we split our time between the labour ward and the operating theatres and were given the chance to assist in theatre. Caesarean sections are popular among Vietnamese women and we were quite shocked by the conveyor-belt like approach to performing Caesareans, with two women being operated on simultaneously in one theatre. The Labour ward was also vastly different to my experience of Obstetrics in the UK. Women in labour were not given any form of pain relief, and husbands and other family members were kept out of the birthing room, with infection control cited as the reason.

During my time at Bach Mai Hospital, I feel that I gained an insight into the differences between the way medicine is practiced in Vietnam compared to the UK, particularly with regards to attitudes towards patients’ dignity and autonomy. I also learned a bit about the Vietnamese healthcare system. Hanoi was a really exciting city to live in, and I thoroughly recommend it as a place to visit. 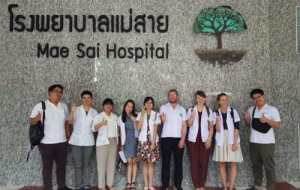 The second half of my elective was spent at Mae Sai Hospital, a small regional hospital in the northernmost town of Thailand. During our time at Mae Sai we rotated around the male and female wards, the labour ward and the emergency department. Resources at Mae Sai were somewhat limited, basic blood tests, X-rays, and ultrasound scanning were available but there was no CT scanner.

As in Vietnam, we were unable to communicate with patients, but ward rounds were generally carried out by a single doctor who would take the time to explain each of the patients to us in English. While on the wards we saw some interesting infectious diseases cases, including dengue fever and Strep. suis meningitis, which we had never come across in the UK.

In the emergency department, we were able to get some hands-on experience suturing wounds and helping with minor operative procedures, such as incision and drainage of an abscess. While on the labour ward, we were also allowed to assist in theatre and perform antenatal ultrasound scanning under supervision.

Overall, I really enjoyed my time at Mae Sai Hospital. A large part of this was how kind and welcoming all the doctors and nurses were. The team of interns took us out for lunch with them every day and invited us to other social events (including a karaoke party!). I think I achieved my objective of learning about the practice of medicine in a resource-limited setting and gained some experience in performing practical procedures.

I would like to thank University College Oxford, the Enid Linder Foundation, and the Oxford University Cornwall Society for their generous grants which helped to fund this elective.