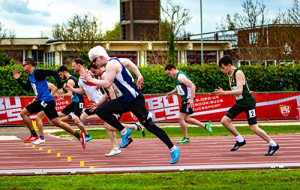 Conrad Will (2016, History and Politics) discusses how he started competing in disability athletics, training while studying and his next goal after winning two medals at the British Universities and Colleges Sport Outdoor Athletics Championships.

I have been competing in disability athletics on and off for about six years. I had always done well in the sprint events at my school sports day, but it was the London Olympics in 2012 that really gave me the push I needed to find a club and start training. The Paralympic Games were a huge milestone for disability sport in this country and around the world—never before had para athletes been given that much airtime and their achievements so widely celebrated. It was the perfect time to get involved in athletics. I trained hard for about a year and won a couple of national age-group medals in the summer of 2013, but my development was halted by forthcoming GCSEs and A Levels and the hour’s drive in rush hour to my local club proved difficult to sustain. I fell out of the sport for the next few years, focusing on rugby instead (the bread and butter of the sporting programme at my school). It was only in my second year at Oxford that I decided to give athletics another go. 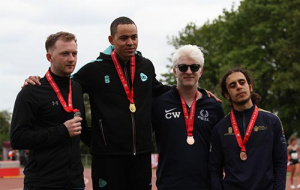 Last season was mixed: I had thought that I could just pick up from where I left off when I was 16 and, presumably, be running much faster. Instead, I found myself way off the standards I had hoped for and spent much of the season racing my way back into fitness—finally running a new personal best in my penultimate 100m race of the season on tour with the Achilles Club (the parent club of both Oxford and Cambridge Athletic Clubs) in Helsinki. But that was where I wanted to be at the beginning of the season, not the end, and so this past winter I have been training hard to make genuine progress this year and not simply make up lost ground. The short sprints (100m and 200m) squad at Oxford train together 3 times a week, interspersed with gym sessions. There’s a great atmosphere in the squad. Winter training is often gruelling and gratification seems a long way off on a freezing January evening down at Iffley, but we lean on each other and I have found that a hard winter track session is a good antidote to the stresses of an Oxford degree. 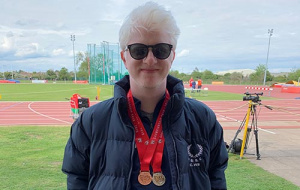 So far, things are going more or less to plan: I ran a really encouraging new 60m PB at the BUCS Indoor Championships in February—it wasn’t quite enough for a medal but it did mean things were moving in the right direction. It’s great that BUCS have included para events in their athletics championships. It puts us on a par with some of the best young athletes in the country and is an essential part of the pathway to representing Paralympics GB. Since there are not enough athletes in each classification (mine, for example, is T13—denoting a visual impairment), we all compete together in an “ambulant” competition, while there are separate races for wheelchair athletes. This means that winning medals isn’t a simple case of who crosses the line first. Points are calculated by plugging an athlete’s time into an algorithm which takes account of their disability and produces scores with which athletes are then ranked. This so-called “RAZA” system is used internationally and ensures fair competition between disabled athletes. It does mean, however, that medals at BUCS can be hard to come by! There were several male and female athletes competing this year who have represented Great Britain internationally—including another University student, Polly Maton, who was in the squad for Rio 2016. With such a high-class field, I was delighted to come away with bronze and silver in the 100m and 200m respectively. For many of the University’s athletes, the Varsity match on 18 May is the climax of the season, but I will be competing throughout the summer, hoping for selection for the World Para Athletics Championships in Dubai in November.

As is traditional Univ’s day started…