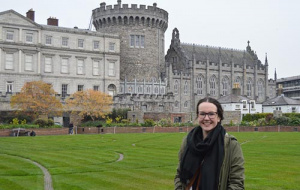 The BNA conference, held in Dublin, Ireland, was a jam-packed few days of fascinating talks from leading neuroscientists from both Britain and abroad.

I arrived late on Saturday, the 13th April, and settled into my AirBnB for the night. The following morning, I headed to the conference venue for coffee and lunch before attending the first session entitled: “The multi-morbid old brain”, which consisted of a series of 4 talks on neurodegeneration and dementia. This was followed by a poster session and then another set of talks on “The link between neuroinflammation and dysregulated metabolism in the context of age and Alzheimer’s disease”.

Monday morning started with a fascinating set of talks at the President’s session on “Safeguarding credibility and reproducibility in neuroscience”, which explored some of the major pitfalls of current neuroscience research and it’s lack of reproducibility, as well as way in which early career researchers can help to change the culture in neuroscience research. The rest of the day was spent engaging with poster presenters, trade exhibitors and trialling out some new equipment. I was particularly interested in advances to Transcranial Magnetic Stimulation equipment, as I had spent most of Hilary Term on a research project using TMS, and enjoyed learning about the new equipment and software.

Tuesday’s focus was on traumatic brain injury. I particularly enjoyed the discussions on concussion and chronic traumatic encephalopathy at the “Impact factor: Concussion and brain health” session. This session highlighted very interesting translational work on the blood brain barrier after brain injury. In addition, Professor Ann McKee from Boston University, who is a world leader in her field, presented an update on CTE and some of the controversy surrounding it. There was also a new set of poster presentations to attend.

That evening, a social for students and early career researchers was held which included a presentation on the benefits of Irish dancing for patients with movement disorders, and a chance for us to all learn some steps.

On the final day of the conference, I attended the sessions themed around vascular neurology, which explored advances in neuroimaging techniques for stroke patients, as well as advances in therapy for acute strokes.

All in all, it was a fantastic learning experience with exposure to both basic, translational and clinical neuroscience, and presented work from a broad range of fields and interests.

Thank you very much for the opportunity to attend!