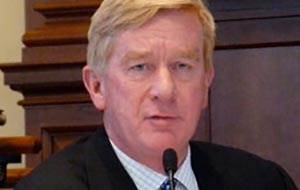 Univ Old Member, William F Weld (1966, Economics) looks set be on the national ticket as the vice-presidential nominee of the Libertarian Party.

The twice-elected former Republican Governor of Massachusetts has given his first interview since accepting an invitation to be the running mate of former Gov. Gary Johnson of New Mexico with the New York Times. You can read the full interview here.