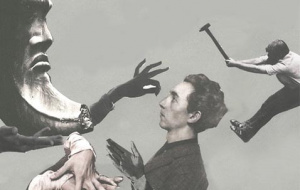 This week is an exciting one for the Univ Players and a highlight of the year for many members of the College as the Univ Garden Play will be held in the Master’s Garden from Wednesday to Saturday.

This year’s production is Under Milk Wood – a play originally written for radio by Dylan Thomas shortly before his death in 1953. As many Garden plays do, the show has a rural theme; exploring life for 24 hours in “Llareggub”, a remote Welsh town fishing town, where life mainly exists in the space of three streets. The play examines many of the themes that are most closely associated with Thomas’s work: life in Wales, the passing of time and the stagnant quality of life away from the city. The original script had scope for up to 70 different characters and adapting it to be performed on stage is an impressive feat – this production features 14 actors, many of them taking on multiple roles.

The cast are excited about the performance as it has allowed them to explore the creative potential of a relative unusual dramatic form. They have explored a piece created by a writer who was primarily a poet and paid particularly close attention to its linguistic detail and beauty.  In many ways the play is similar to a poem: two voices and an omniscient narrator lead the dialogue, and the production crew have built on this foundation with the set and physical action. They also use radio mics to make the action as immersive as possible for the audience.

A diverse team of creative minds has collaborated to make this a very promising production, which is sure to be entertaining and enlightening.  Several familiar faces from the College and University drama scenes make and appearance, well supported by a crew of dedicated students from Univ.

The run will include an adapted performance of the production for the William of Durham Club on Saturday afternoon at 2.30pm.