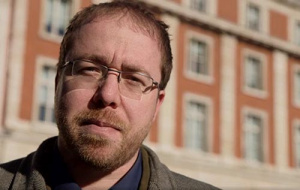 Dr Joe Moshenska, Beaverbrook and Bouverie Tutorial Fellow and Associate Professor of English, has been awarded a Philip Leverhulme Prize. The award is given to researchers at an early stage of their careers whose work has had international impact and whose future research career is exceptionally promising.

The Leverhulme Prize can be used for any research purpose and each prize is valued at £100,000. It has been given since 2001 in commemoration of the contribution to the work of the Trust made by Philip Leverhulme, the Third Viscount Leverhulme and grandson of William Hesketh Lever, the founder of the Trust.

Before coming to Oxford, Dr Moshenska was Fellow and Director of Studies in English at Trinity College, Cambridge. He works on the literature and culture of the sixteenth and seventeenth centuries, especially Faerie Queene and Paradise Lost. He has written three books: Feeling Pleasures: The Sense of Touch in Renaissance England, A Stain in the Blood: The Remarkable Voyage of Sir Kenelm Digby and Iconoclasm as Child’s Play. He is also the Series Editor for the Edinburgh University Press series Edinburgh Critical Studies in Renaissance Culture. Dr Moshenska has also appeared on various BBC programmes, including this video about the first Chinese recipe to be published in England.

Dr Moshenska commented on the significance of the prize: “The distinctiveness of the Philip Leverhulme Prize lies in its flexibility – it’s not orientated towards one specific piece of research in the manner of most grants and fellowships.  The prize will be enable me both to bring my current research projects to fruition much more speedily, and to open entirely new horizons for my subsequent work, at a stage of my career which is usually about keeping one’s nose as close to the grindstone as possible.”

Dr Polly Jones has been interviewed by Lithuanian…

Maurizio Giuliano has been assigned…