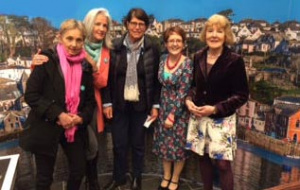 Last week saw Univ’s English lecturer Dr Laura Varnam once more in Cornwall for the Fowey Festival of Arts and Literature as it celebrated its 21st birthday.

Laura has been presenting at the Festival since 2010, contributing to a variety of events including lectures, reading groups, and panel discussions, mainly focusing on the Festival’s primary theme, the life and works of Daphne du Maurier.

Daphne du Maurier: Sur les traces de Rebecca (“In the Footsteps of Rebecca”), a biographical documentary of the author to which Laura contributed, aired at the Festival on Friday. It was followed by a panel discussion, chaired by Professor Helen Taylor of Exeter University, with Laura, the film’s director Elisabeth Aubert Schlumberger, producer Patricia Houtart, and biographer Tatiana de Rosnay, contributing.

“I was delighted that we were able to show the film to du Maurier fans in Fowey”, Laura comments, “and it was great to take part in the panel discussion about the making of the film. I was interviewed here at Univ in May 2016 and the Winter Common Room provided a wonderfully atmospheric background to some of the scenes focusing on Manderley, the house at the centre of du Maurier’s most famous novel, Rebecca.”

Laura also took part in another sell-out event at the Festival, an interview with Tatiana de Rosnay about her new biography of du Maurier: Manderley Forever. Laura explains: “First published in French in 2015, Manderley Forever has just been published in English in America and will be published in the UK in the autumn. A unique portrait of du Maurier by an extraordinary writer, de Rosnay’s book is fascinating, sensitive, and engaging. It is a must-read for all du Maurier fans and will contribute significantly to our efforts to redefine du Maurier’s public reputation as one of the twentieth century’s most significant writers.”

Laura will be contributing an article about her work on du Maurier to the next edition of The Martlet.

Further details of the Fowey Festival of Arts and Literature can be found here.