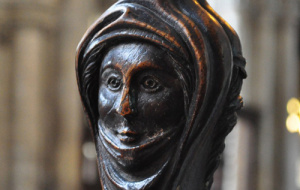 Margery Kempe Studies in the 21st Century was the first conference to be focused exclusively on the fifteenth-century mystic Margery Kempe and her Book. A married mother of fourteen children from King’s Lynn in Norfolk, Kempe reinvented herself as a mystic and produced a fascinating book about her experiences which is now a staple of undergraduate study and medieval scholarship.

The Book of Margery Kempe details Margery’s mystical weeping, dialogues with Christ, religious visions, pilgrimages from Europe to the Holy Land, and her often-fraught relationship with her communities as they try to make sense of this unusual and often provocative medieval woman.

The three day conference at Univ featured four keynote talks from leading Kempe experts and twenty-four papers and brought together delegates from across the world – America, Australia, Europe and Japan – to reassess The Book of Margery Kempe from a range of perspectives. Modern approaches such as queer theory, disability studies, and performance theory cast new light on the representation of Margery in her Book and new historical documents and discoveries were revealed which ground Kempe more firmly in her fifteenth-century context, both in England and abroad.

The conference also included innovative and creative responses to the Book. The College Chapel played host to a powerful and moving dramatisation of the meeting between Margery Kempe and her fellow female mystic Julian of Norwich, Marge & Jules, written and performed by Sarah Anson and Mairin O’Hagan. Food history also played an important role as Dr Kalas Williams revealed the recipe of medicinal sweets inscribed at the back of the Kempe manuscript and Dr Theresa Tyers produced the sweets so that they could be tasted by delegates, for the first time in four hundred years.

At the conference, Dr Varnam and Dr Kalas Williams launched the Margery Kempe Society which is dedicated to supporting and promoting the study and teaching of Margery Kempe and her Book. The Society website will be a space to share research and resources, and for guest blogposts on Kempe.

This major international conference marks a turning point in Kempe studies and demonstrates the Book’s vital importance to medieval literary scholarship in the twenty-first century.

The programme and abstracts can be found on the conference website at margerykempeconference.wordpress.com