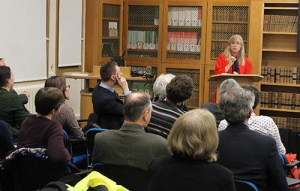 With thanks for the report to Megan Griffiths, Access and Equal Opportunities Rep, Univ JCR.

The 9th Annual Access lecture, given on 6 February 2018 by Professor Anna Vignoles, was titled: What does the evidence on widening participation tell us? The talk was an in depth discussion of empirical evidence in widening participation, something that Professor Vignoles, as Professor of Education at Cambridge, is well placed to speak on, since she has used her extensive research to advise on government policy. The real success of the talk, for me, was that it maintained an engaging passion for educational equality that resulted in real optimistic solutions, both small and large scale, rather than becoming disheartened by the statistics on show.

The talk began by asking what the ultimate aim of Widening Participation initiatives is and, if it is social mobility, whether this has been effective. Professor Vignoles’ answer was partly “yes”, while recognising that education has not been the great leveller that it was once thought to be. There is, however, as our speaker argued, still hope for the role of education; a skilled population will stimulate the economy, and create lots of good jobs so students from less privileged backgrounds get the opportunity to join others at the top. This would progress towards “absolute” rather than “relative” social mobility, where some move up and others move down. I found this to be a really positive way of looking at education and it made me feel optimistic that education is not just a way to make people more competitive in a job market but can benefit wider society.

The talk then moved onto the actual evidence about educational equality which was, admittedly, very hard to listen to. Educational gaps can be seen as early as aged three and widen on entry to secondary school. Once students from poorer backgrounds get to university they are less likely to complete their degree and, if they do, are less likely to get a top grade Even after graduating, students from higher income backgrounds (after controlling for university attended and subject studied) earn about 10% more than others. Yet, this was not the end of the story. Professor Vignoles pointed to the importance of investing in early years’ education, increasing aspirations through widening participation initiatives and helping students to learn about the job market. There were even very specific suggestions, such as texting sixth form students and their families important UCAS dates. I was particularly inspired by these optimistic suggestions from someone who has spent so long working with bleak data.

Ultimately, Professor Vignoles was arguing for a push to tackle inequality on a much broader scale, reducing wage inequality and regulating the market better. It was this larger picture that particularly captivated me and I left the talk encouraged by the possibility of tackling wider, as well as educational, inequalities.

Welcome to the first of a series of regular updates…

Today marks 100 years since the Representation of the People Act…

Univ is organising a team for the Oxford Town & Gown…