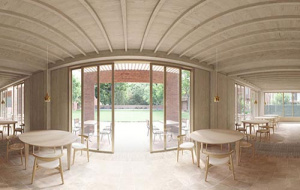 Univ North is the College’s most ambitious development project for several centuries. The project encompasses the existing Staverton Road site as well as the recently acquired and adjacent Fairfield site and nearby College-owned properties. To gather views and suggestions from members of the College community the Univ North Working Party was convened, meeting for the first time on 24 February 2017.

The Working Party has seven stated aims. It looks to explore the opportunity to establish a new Univ academic community that imaginatively furthers the educational objectives of the College and develop the academic and social facilities need for supporting a new academic community. It will ensure that planning constraints are taken into account regarding the College’s development and take account of the importance of good communal relations, in particular with the Fairfield residential home, in drawing up the plans. The Working Party is also responsible for looking at the short-term and long-term consequences of the Univ North development, producing an indicative masterplan and assessing the architect’s plans. Finally, the Working Party feeds back and makes recommendations about the development of Univ North to the College’s Governing Body and to its supporting committees.

Bidwells have run many construction projects in Oxford, including developments for Balliol College, Mansfield College and Keble College. Barton Willmore is the UK’s leading independent planning and design consultancy. They have done many projects across Oxford and Cambridge, including Univ’s new Boathouse.

The Working Party is serviced by The Master’s Office and meetings are scheduled as required by the effective completion of its objectives.

University College, North Oxford is the most…