The German icebreaker Polarstern is currently frozen into pack ice north of 85N in the middle of the Arctic Ocean. The ship’s lights were visible from space during the long darkness of polar night. Now, with the return of the sun, the icy landscape beyond these pools of light is again visible. On the starboard side of the ship is a 3km wide ice floe on which small cities, populated by scientific instruments, are connected by skidoo tracks and electrical cables to the ship. Scientists in red snowsuits attend to their instruments and deploy remote controlled vehicles under the ice. Polar bear guards keep a constant watch.

This ice floe is the central observatory of the MOSAiC (Multidisciplinary drifting Observatory for the Study of Arctic Climate) expedition. It will be home for the Polarstern for a whole year, during which time ship and ice floe will drift across the North Pole towards Fram Strait, between Greenland and Svalbard, following the Transpolar Drift. 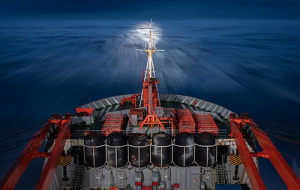 A 40km wide network of smaller observing sites surrounds the central observatory. This network was deployed by a team onboard the Russian icebreaker Akademik Fedorov. I was lucky enough to be part of that team, one of 20 postgraduates selected to join the MOSAiC School. It was a privilege to work on the ice and make a personal connection to an environment that I usually engage with remotely through computer simulations and satellite data.

Why, and how, is the Arctic warming twice as fast as the rest of the world? And what are the implications of Arctic changes for the midlatitudes? To answer these questions, we need a better understanding of the interrelationships between atmosphere, ice, ocean, biology and biogeochemistry in the Arctic. MOSAiC, the biggest expedition of its kind, aims to plug this gap, with scientists and instrumentation from across the disciplines working together over a whole annual cycle. 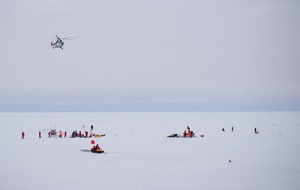 One night on the Fedorov we were kept up by the sound of ice squeezing against the hull. Sea ice is dynamic; instruments can be buried where ice floes converge, cables can be snapped as floes shear or leads (cracks) open. The central floe, chosen for its thickness and stability, has already sheared, separating one part 500m from the other. The MOSAiC team will have to dig in and be resourceful in harsh conditions. But the prize is big: to deliver a dataset that could help revolutionise Arctic science.

Sam is a DPhil student studying the physical oceanography of the Arctic Ocean. He joined the Multidisciplinary drifting Observatory for the Study of Arctic Climate (MOSAiC) as part of the MOSAiC School, supported by IASC, APECS, MOSAiC, AWI and ARICE.

This feature was first published in Issue 11 of The Martlet; read the full magazine here.

This is the story of the so-called Hood-Hearst Papyrus…