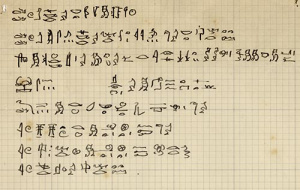 This is the story of the so-called Hood-Hearst Papyrus, an ancient Egyptian artefact dating to around 300 BCE. Originally deposited in a tomb, it was intended to assist its deceased owner on his journey through the afterlife. However, it ended up on quite a different odyssey altogether. Its modern history becomes tangible in the decade from 1851 to 1861, when the Reverend William Frankland Hood (1824–1864) from Nettleham Hall in Lincolnshire, United Kingdom, went to Egypt for health reasons. During his stay, he acquired a number of ancient Egyptian antiquities, among them a papyrus which came to be known as the Hood-Hearst Papyrus.

After Hood’s death, the object was auctioned off at Sotheby’s in London in November 1924. In the catalogue, it was described as follows: “A papyrus roll, measuring about 15 feet in length, containing two long religious texts, which are believed to be new […] the roll is in excellent condition”. The manuscript was purchased by William Randolph Hearst, the famous newspaper magnate, and thus left England for New York. About 20 years later, when Hearst experienced financial difficulties, he had to sell off major parts of his collection and so the papyrus changed hands once more in 1941. The description of the document in the corresponding sales catalogue is the last published reference to the papyrus as an intact object, i.e. as a complete roll.

Shortly afterwards, it was purchased by Dawson’s Book Shop in Los Angeles. Evidence seems to point to this particular establishment as the scene of our crime, the place where the papyrus was, unfortunately, cut into smaller pieces. These were then individually advertised in the sales catalogue of 1940–1941 as ‘Papyrus Fragment Before 30 B.C. An Egyptian papyrus fragment from the Book of the Dead […] a portion of a roll formerly owned by the Reverend Frankland Hood and later by William Randolph Hearst. $15.00’. As there are no records of these sales, we lose track of the papyrus pieces.

The study and attempted reconstruction of the Hood-Hearst Papyrus goes back as far as 1965, when Prof Gerald Kadish from the State University of New York at Binghamton started his quest. By 1971, he had already found two joining pieces. In the following years, several other fragments of the original papyrus roll have resurfaced, of which two were found by Professor Kadish, two by the American Center of the International Photographic Archive of Papyri, three by Dr Emily Cole of the University of California, Berkeley, and three by Professor Brian Muhs of the University of Chicago (Muhs, B. (2018). Collecting and Commoditizing Cultural Properties: The Case of William Randolph Hearst’s Papyri. Journal of the American Research Center in Egypt 54, 117–127).

In May 2019, a new chapter in the life of the papyrus started, when the project entitled “Of parts and pieces: Reassembling the Osiris liturgies of the Hood-Hearst Papyrus” was founded. Based at University College in Oxford, United Kingdom, it is directed by Dr Ann-Katrin Gill in collaboration with Dr Francisco Bosch-Puche from the Griffith Institute, University of Oxford. Its objective is to track down and re-gather as many of the individual pieces a  possible, to virtually join them, and thus to bring the papyrus roll back to its former glory through a digital reconstruction. Up until today, the project has recovered five additional pieces, bringing the total of known fragments up to 15. These constitute about half of the original document. 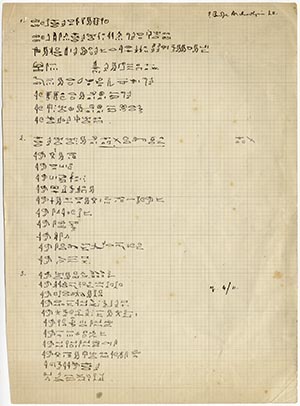 A lucky find in the papers of the Egyptologist Percy Newberry (1868–1949), currently housed in the Griffith Institute archive at the University of Oxford, provides us – apart from the sales catalogues – with the so far only known information regarding the content of the document before it was cut up and vanished. Newberry’s handwritten notes contain four pages of hieroglyphic transcriptions from the final section of the Hood-Hearst Papyrus (image right: First page of Newberry MSS. 5/5/12.1 © Griffith Institute, University of Oxford). As we know that Percy Newberry prepared the catalogue for the Sotheby’s auction of the Hood material in 1924, it must have been around this time that he made his transcript. In his introduction to the catalogue, Newberry notes: “The roll of papyrus, No. 135A, has never been entirely unrolled, yet it contains a hymn of which, so far as I am aware, no other copy exists”.

The text inscribed on the papyrus roll is nowadays referred to as “The Great Ceremonies of Geb”. This composition was of great importance for the successful performance of the so-called Khoiak Festival which was celebrated for the benefit of Osiris, the god of the netherworld. This event was certainly the most important religious festival in ancient Egypt.

According to Egyptian mythology, Seth, jealous of the successful earthly reign of his brother Osiris, killed and dismembered him, scattering his limbs all over Egypt. With the help of various magical acts, Osiris’ body parts were found and collected. After reassembling him, he was revivified and became the ruler of the netherworld. During the annual Khoiak Festival, his fate was symbolically re-enacted by celebrating his bodily reconstruction, revivification, and triumph over his enemies all over Egypt. Taking place each year in the inundation season, a crucial period for people whose survival depended on the Nile, these events were connected to the imminent awakening of nature and were thus equated with the wellbeing of the Egyptian state. As the gathering and reassembling of the scattered pieces of the Hood-Hearst Papyrus is reminiscent of the fate of the Egyptian god Osiris, the project’s title “of parts and pieces” seemed apt, especially as its ultimate aim is the resurrection, i.e. reconstruction of the whole papyrus.

So far, each of the 15 pieces found dispersed all over the US has its own fascinating story to tell. Yet, only one should be told here. The quest for this one particular fragment started with the Newberry Library in Chicago, which was among the first libraries we had contacted. 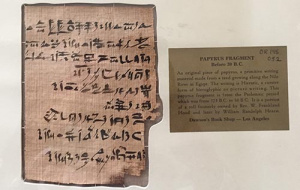 Dr Suzanne Karr Schmidt, the curator of its rare books and manuscripts, very kindly replied to our email apologising that the only papyri they currently have in their collection do not fit our description. However, she attached the information cards of those papyri that the library had sold in 1994. And there it was: one of the fragments we were looking for – the description on the card leaving no doubt about it. Now, we knew where the piece was prior to 1994, but there was no information on where it had gone afterwards. So, the search continued. In a next step, we contacted the British dealer involved in the papyri sale and he kindly contacted the new owner of the fragment. In the meantime, Dr Karr Schmidt and the incredible team of the Newberry Library kept digging and found a photograph of ORMS 52 (the call number given to the object), pictures of which she immediately forwarded to us. Of course, we were very thrilled by this discovery, as our systematic search finally bore fruit. However, needless to say, this particular specimen left us no peace, so simultaneously we continued investigating, until a few days after we contacted the British dealer that very same fragment appeared for sale online, advertised by a bookshop in Norfolk. Of course, in order to not lose trace of it again, the project immediately acquired it and it arrived the same day we received the photographs from the Newberry Library (image above, left: Section of the Hood-Hearst Papyrus (height around 13cm) with its old description label and the Newberry Library call number still attached © Dr Ann-Katrin Gill). For now, it is professionally housed in the temperature-controlled archive of the Griffith Institute, close to Percy Newberry’s transcript which started this whole quest.

The above is only one success story—hopefully one of many others yet to come—, showing what research can achieve through international communication and collaboration, and especially the incredible kindness and help of all the people and institutions involved in our search. But let us not forget that half of the original papyrus roll is still somewhere out there, waiting to be rediscovered. As already mentioned, our aim is to track down as many fragments as possible, join the pieces with their counterparts, reveal their history, and make them available in a publication. In short: The project wants to give the papyrus the attention and care it deserves. The missing fragments are not necessarily all housed in library collections, but some of them might still be in private hands. So, if anyone has any information about these pieces, we would be very grateful if you could get in touch with us. Just like the body parts of Osiris were collected and reassembled by a group of collaborators, we as a community can piece together the fragments of this manuscript, thought to be lost forever, so that the Hood-Hearst Papyrus can finally come back to life.

Are you involved?
If you are involved in research or frontline work relating to COVID-19 that you would like to bring to the attention of the Univ community worldwide, please email communications@univ.ox.ac.uk.