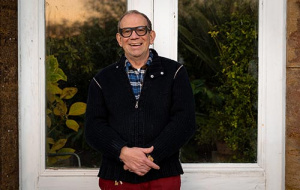 Jon Plowman OBE (1971, English) is a television and film producer. He has been a producer at the BBC since 1980, when he produced Russell Harty’s chat show Harty. He moved on to executive producing at the BBC in 1986, working on sketch show A Bit of Fry and Laurie, and became Head of Comedy Entertainment in 1994. He produced the first four series of the BBC comedy show Absolutely Fabulous between 1992 and 2001, plus the big screen version in 2016. He brought into prominence household names such as Ricky Gervais, Stephen Merchant, Matt Lucas, David Walliams, French and Saunders, Fry and Laurie, and many more, winning along the way four BAFTAs, three Royal Television Society (RTS) awards and several international accolades including a Golden Globe for The Office.

Was your time with the Univ Players an influence on your producing career?
I directed a show for Cuppers that narrowly missed out to Mel Smith. I think he cheated by doing a 35-people production of Marat/Sade. Me doing a play with three people about blindness didn’t stand a chance. I think the judges at the Playhouse were the Observer critic and Anthony Hopkins, though I may have misremembered that. At the end of our time at Univ, I remember standing in the lodge with two of my friends (including Andrew Motion, who went on to become Poet Laureate), also English students, wondering what we were going to do now.

In that group, we were going to go into writing, theatre and television, but at the time it didn’t matter that much. I feel sorry for your generation for whom it’s harder, with more pressure. I was lucky to be part of a company that went to Edinburgh every year, and because there was a slot on offer I wrote a play, about J M Barrie. When in doubt, write yourself something. This was before there were books or programmes made about him, and I luckily got a very nice review in The Sunday Times which helped me get a job at the Royal Court. I remember at the time thinking something will happen, and, curiously, it did.

What was the transition from theatre to TV like?
A few years after leaving Univ and while working at the Royal Court [under film director Lindsay Anderson], I rather thought I was going to be a theatre director, but it turned out that nobody else thought that! I was still going back to Oxford a few years after leaving Univ, and was asked to help direct two productions for the Oxford and Cambridge Shakespeare Company, which was started by Jonathan Miller. We toured in America, and began to include members from other universities, including the late Rik Mayall. I then worked for the Arts Council, as I thought working away from London would be a good change.

I got into TV because I saw an advert by Granada Television for theatre directors who might want to train as television directors. I was told I was too young to be a TV director, but ended up working as a researcher and in the newsroom. There was a day where those in charge realised I was not going to be the next Trevor McDonald. I once tried quite hard for a report in Liverpool to get a good shot with both cathedrals in the background, which turned out not to be the done thing. I eventually moved to entertainment, and the rest is history. The first programme I did was about a clairaudient called Doris Stokes. She would tell great numbers of people things like “it’s ok, he likes the new wallpaper”, “your great auntie loves you”, and so on. In the end, “If God was going to come back, he wouldn’t do it on a chat show” was printed in a newspaper, meaning the programme got banned by the IBA. A little while later, a man called Richard Curtis, with whom I’d worked because of Oxford, asked me to produce his next programme, giving me a foot into the world of comedy. So my career is a classic example of the idea that you never manage to shake off the people you meet at university. 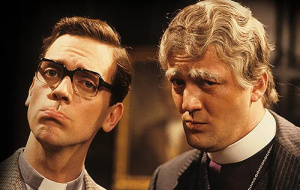 Hugh Laurie & Stephen Fry – A Bit of Fry and Laurie

You’ve produced such successes as A Bit of Fry and Laurie, French & Saunders and The Vicar of Dibley, been BBC Head of Comedy, and more recently produced W1A and Inside No. 9. How do you think our national comedy scene has changed?
Comedy always has to be new, and has to keep changing. I was lucky to coincide at the beginning of my comedy career with a group known as the alternative comedy circuit. That wave produced a lot of programmes. After that, there was a shift towards stand-up. Each new era of comedians react to the last. More recently, I think comedy has gone out of fashion. Senses of humour aren’t the same worldwide, and what makes a British audience laugh may not be for everyone. If you’re trying to make things that sell round the world, it’s more likely to be drama and not comedy, and that’s a shame. The appeal of comedy needs to be wider if it is to succeed at all. Comedy is also very risky. But, sometimes the risks pay off: when Ricky Gervais and Stephen Merchant came into my office [with a proposal for a programme about another office], they were very confident. The audience, though, were unsure about whether The Office was a docu-soap at first, and curiously it did much better in its second series for the fact that people had realised it was supposed to be a comedy. So, you have to do a bit more work on the audience with comedy.

What was your experience writing your recent book How to Produce Comedy Bronze?
My main thought was “Good Lord, I didn’t think I could remember all this.” It’s amazed me how memories have come back to me in the way they have. I must thank Univ for teaching me something about telling good writing from bad writing. Really, I only wrote it so people didn’t have to listen to me talk so much. 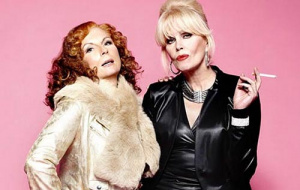 What project have you enjoyed working on the most during your career?
Am I allowed two? The first was Absolutely Fabulous. We had a lot of fun doing it, and it was a big hit, so it led to other projects. The other is Beautiful People, which was written by Jonathan Harvey (who also wrote Gimme, Gimme, Gimme), and was based on the memoirs of the same name, by Simon Doonan [now Creative Director of New York City-based clothing store Barneys]. It stars Olivia Colman and Layton Williams. It had music and dancing, felt very lively, and it’s my favourite. We did two series of it and I’m proud of it.

Do you have any tips for budding television makers?
Just keep doing it. The passion is the thing people notice. If you can appear to exude confidence in the idea, there’s a reasonable chance somebody will get on board and help you with it. Luck helps, but to a certain extent, you make your own luck, and so make the most of what you’re best at.

What does Univ mean to you? Did anyone particularly inspire you during your degree?
I was interviewed for a place at Univ at a time when there were a lot of power cuts because of electricity workers strikes. When I was interviewed in the late afternoon it was getting dark and all the candles were with the dons at the other end of the table from me. They couldn’t really see me and I think that must have helped. I had a great time; it was all new to me. I met hundreds of people, and I like the extraordinary idea that you arrive and within a week you’re supposed to write essays on Gerard Manley Hopkins, whose poetry you’ve never read before, and get to grips with something apparently called “sprung rhythm”. I learned a lot, I did quite a few plays, and I met my partner, [theatre and opera director and TV producer] Francis Matthews (1972, English). The late and sadly missed Dr Roy Park was my tutor while here and a big inspiration. He was such an enthusiast, especially about William Hazlitt. It was as though he was lit up by him, and I think being lit up by anything is important to getting you through. 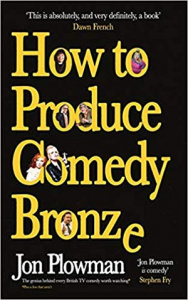 How to Produce Comedy Bronze is available in Hardback, Kindle and Audiobook (narrated by Hugh Dennis). Series 6 of Inside No. 9 has been commissioned.

This feature was first published in Issue 11 of The Martlet; read the full magazine here.

It’s not the best time to be…

This issue contains a section dedicated…