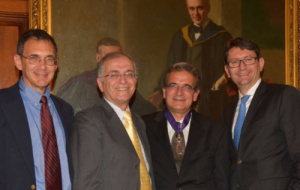 Professor Ares J Rosakis (1975, Engineering), Theodore von Kármán Professor of Aeronautics and Mechanical Engineering at California Institute of Technology (Caltech), has been awarded the 2020/2021 Horace Mann Medal for his research and mentoring skills, as well as being “a champion of societal impact that can be realized through the sciences.”

Professor Rosakis joined the California Institute of Technology (Caltech) as an assistant professor in 1982 as the Institute’s youngest tenure track faculty member. In 2004, he was named the Theodore von Kármán Professor of Aeronautics and Professor of Mechanical Engineering. In 2013, he was honoured as the inaugural recipient of the Otis Booth Leadership Chair, Division of Engineering and Applied Science.

From 2009-2015, he served as the Chair of the Division of Engineering and Applied Science (EAS) at Caltech. Prior to being Division Chair of the Engineering and Applied Science Division, Rosakis served as the fifth Director (department head in other institutions) of the historic Graduate Aerospace Laboratories (GALCIT) formerly, known as the Guggenheim Aeronautical Laboratories. GALCIT is the mother institution of Caltech’s and NASA’s Jet Propulsion Laboratory (JPL).

Professor Rosakis has received many awards in mechanics, aerospace and materials failure including the 1989 Rudolf Kingslake Medal and Prize from the International Society of Optical Engineering (SPIE), the 1992 Hetényi Award, the 1996 B. L. Lazan Award and the 2003 Frocht Award. More recently, in 2016 he was awarded the Theodore von Kármán Medal from The American Society of Civil Engineers (ASCE) for his discovery of super-shear frictional earthquake ruptures and was also elected member of the National Academy of Sciences (NAS). In 2017 he was elected Honorary Fellow of the International Congress on Fracture (ICF) and Fellow of the American Geophysical Union (AGU).

Professor Rosakis was a member of the visiting committee for the Department of Aeronautics and Astronautics at MIT and is currently a member of the visiting committee for Civil and Environmental Engineering at Northwestern University. He has served as Member, Ex-Officio Member and Chair of various Boards and Councils including the Advisory Council of NASA’s Jet Propulsion Laboratory, the Board of the Joint Center of Artificial Photosynthesis (JCAP) and the steering committee of the Keck Institute of Space Studies (KISS). He is currently a vice President of the International Conference on Fracture (ICF).